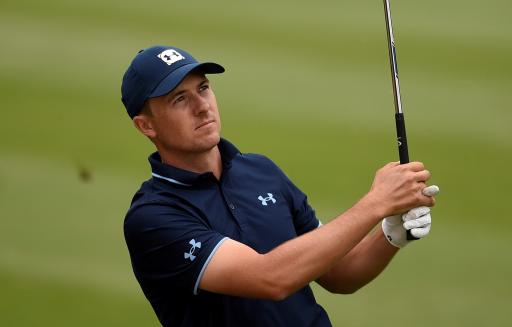 Jordan Spieth hit the greatest flop shot we have seen on the PGA Tour this year when holing out for birdie from being short-sighted on the par-3 11th.

With the commentators wondering how Spieth was going to hold the green, let alone get his ball up-and-down for par, the short-game wizard stepped in and produced a moment of magic.

Spieth flopped his ball over the bunker and landed it on a six pence as the ball slammed into the pin and down for a birdie-two.

As the ball clattered against the pin and went down, Spieth shook his head while looking down at the grooves on his wedge.

The three-time major champion is rightly considered one of the best short-game exponents in the world.

You may recall Spieth did the unthinkable at the Ryder Cup last month.

Justin Thomas found the deep rough with his tee shot on the 17th hole in the foursomes, leaving Spieth with a sideways shot off a hill.

With TV cameras struggling to even pick up the ball, Spieth stepped in and thrashed at the ball, popping it up beautifully down to six feet, while running down the hill having been put off balance during the strike.

Thomas misses the par putt though, and Rahm and Garcia guide #TeamEurope to a 1-0 lead in the 43rd Ryder Cup!