Sam Ryder records the 10th ever hole-in-one on the famous 16th hole at the WM Phoenix Open. 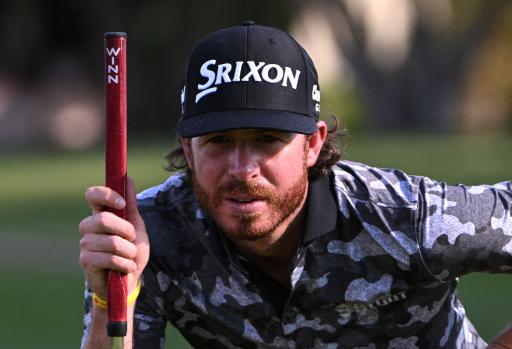 Sam Ryder recorded the 10th ever hole-in-one on the famous par-3 16th hole at the WM Phoenix Open, and he sent fans into a frenzy.

Ryder, 32, sent his tee shot straight over the pin to the right of the cup and spun it back into the hole for the first ace on this hole since Francesco Molinari's seven years ago.

RELATED: WHO IS SAM RYDER?

There had been 2,851 tee shots played on this hole since Molinari's hole-in-one here.

As soon as the American's ball found the bottom of the cup, fans went mental while launching their beer cans onto the tee box, bunkers and green.

The place went absolutely bonkers and it took close to 10 minutes for tournament crew to clear the cans for play to commence.

The hole-in-one for Ryder marked an incredible run of holes for him having gone birdie-double-bogey-birdie-bogey-birdie leading up to the 16th.

Ryder's ace moved him back to level par for the round and to 6-under par for the tournament.

He has made six aces in his golf career but this was his first on the PGA Tour, and what a hole to achieve it on.

Since TPC Scottsdale began hosting this tournament in 1987, there have been 10 aces on the par-3 16th.

Who will ever forget Tiger Woods' famous ace on this hole back in 1997.

NEXT PAGE: JON RAHM SIGNS THE DRESS OF A BRIDE - WORN BY A MAN - AT THE WM PHOENIX OPEN