Who are the TOP 10 PGA Tour career earners of all time?

Tiger Woods is clear at the top of the pile of PGA Tour earners of all time, but which other players take up the top 10 spots? 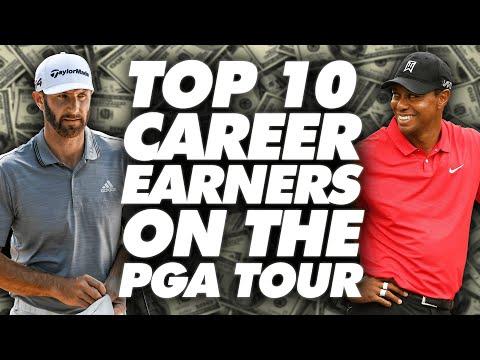 All the talk right now might be about Saudi billions but it certainly pays to be good at golf on the PGA Tour with millions of dollars on the line every week.

Throw in a lucrative pot of gold for winning the season-long FedEx Cup race, and life on this circuit can prove to be very rewarding indeed.

That has certainly proven the case for the top 10 career money leaders in PGA Tour history. You can probably guess who might be a runaway No.1, but let's start at No.10 and work our way down.

It's probably fair to say Kuchar's best golf is behind him now at the age of 43 and he will no doubt be a little frustrated to have never won a major championship having come so close down the years, especially when losing out to Jordan Spieth at the 2017 Open Championship.

But as Phil Mickelson showed when winning the US PGA last year at the age of 50, you're never too old to win a major - so let's see if Kuchar can achieve that over the coming years.

A fresh-faced Garcia first burst onto our TV screens when running Tiger Woods close to the 1999 US PGA.

Garcia had gone years without tasting a major victory, going extremely close at both the US PGA and Open Championship, but the Spaniard managed to finally achieve his dream when defeating Justin Rose in a playoff for the 2017 Masters.

It's fair to say Garcia has been one of the hot-heads on the tour down the years, but since becoming a father in recent years he certainly seems to have mellowed somewhat.

Rose first burst to worldwide prominence as a fresh-faced 17-year-old when holing out from 50 yards for birdie on the 18th hole at the 1998 Open Championship at Royal Birkdale.

Rose won four times on the European Tour before he picked up his first win in America at the 2010 Memorial Tournament with a three-shot victory over Rickie Fowler.

Winning quickly became a habit for Rose and it led to his greatest moment when landing the 2013 US Open with a two-shot win over Jason Day and Phil Mickelson at Merion.

Rose would go on to win Gold at the Olympics in 2016, two years before becoming World No.1 for the first time in his career in a season that saw him also win the FedEx Cup.

At No.7 we have Australia's Adam Scott, the man with the smoothest golf swing the game has potentially ever seen.

His greatest moment came at Augusta when winning the 2013 Masters but if truth be told we feel Scott should have won a couple more majors, none more so than when throwing away the Claret Jug down the stretch to Ernie Els in 2012.

Despite doing just about everything in the sport, getting to World No.1, winning four majors and clinching two FedEx Cup titles, you could argue that McIlroy has underachieved in his career and no doubt many of you would agree.

McIlroy is still only 32 years old so has plenty of time on his side to slip on that Green Jacket he so desperately craves in order to join an elusive group of players to win the career grand slam.

Will he do it this year? We certainly hope so, but we can see it happening at some point in time. We also fully expect to see Rory end up moving quickly up this list.

At No.5 we have the Big Fijian Vijay Singh, winner of 34 PGA Tour titles including three majors and the 2008 FedEx Cup.

Furyk might have one of the most bizarre golf swings ever seen, but it has certainly worked down the years and it just goes to prove there is no one way to play golf. Let the American be an example to many of you out there.

His greatest moment on the tour came in 2003 when winning the 2003 US Open at Olympia Fields, the only major of his career.

Next up we have Dustin Johnson, who is still going strong on the tour with 24 wins and counting.

We can see Johnson easily winning more than 30 times on the tour before all is said and done and that would more than likely see him surpass the $100 million mark in career earnings.

At No.2 is perhaps one of the most controversial figures in all of golf right now, Phil Mickelson.

While he probably doesn't care how much he's won on the tour, we can inform Mickelson he's won $94,955,060 in career earnings.

Mickelson has won an incredible 45 times on the PGA Tour including six majors, with the highlight of his career coming last year when becoming golf's oldest major champion at the 2021 US PGA.

Lefty has caused plenty of controversy in recent weeks in regards to his comments about life on the tour and his desire to join a new Saudi Golf League.

Given Mickelson's recent words, we are fairly certain he won't be adding too many more dollars to his current earnings, but let's see what transpires.

And in at No.1, no doubt to everyone's surprise is Tiger Woods, winner of a record-tying 82 PGA Tour titles and an unbelievable $120,851,706 in PGA Tour career earnings.

Woods has of course won 15 majors with his first major victory coming in a record-breaking Masters romp in 1997 and his last of course at the 2019 Masters against all the odds.

Woods is now back in action after making the cut at The Masters and he will now be hopefully looking to add to his $120 million total.

The former World No.1 said he is ready for the fight and that he wants to go another few rounds in his attempt to win more tournaments.

I don't think there will be one dry eye in the house should Woods go on to land that 83rd title on the PGA Tour.