Although Brooks Koepka's season has been interrupted by injury, he has still managed to pick up a victory and continue his superb career. 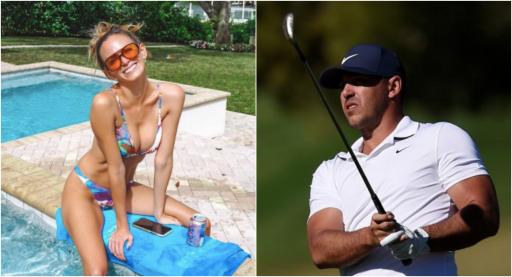 Brooks Koepka met his partner Jena Sims in 2017 and now four years later, the happy couple are engaged to be married.

It was revealed that the four-time major champion proposed to his girlfriend on March 3rd, while the pair were on a beach in Jupiter, Florida. It is fair to say that he chose a great location for a great moment.

While Koepka has been excelling on the PGA Tour, Sims has had a successful acting and modelling career which dates back to 2010.

Sims was born in Georgia and she attended Belmont University, where she studied International Business.

She is now an actress and a model, who has appeared in a vast amount of movies alongside some of the film industry's biggest stars.

In 2013, she appeared in Last Vegas which featured a star-studded acting lineup including Robert DeNiro, Morgan Freeman, Michael Douglas and Kevin Cline.

Sims also had the lead role in Attack of the 50 Foot Cheerleader, which was a comedy film released in 2012 and directed by Kevin O'Neill.

Not only has Koepka's fiancée appeared in films but she has featured in popular television programmes too, such as Dexter, Entourage and Halt and Catch Fire.

Sims is also the founder of Pageant of Hope, which is a non-profit organisation with the goal of empowering children around the world and promoting their self-confidence.

It is clear to see that Sims is extremely talented and has had an exciting career, so this is something that she and her partner have in common.