Russell Henley has been married to his wife Teil Duncan since 2015. 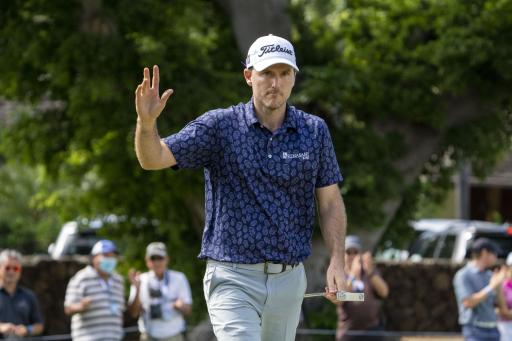 PGA Tour star Russell Henley, who holds a two-shot lead heading into the final round of the 2022 Sony Open, has been married to his wife Teil Duncan since 2015.

Russell Henley, who has won three times on the PGA Tour, first met Teil at her sister's wedding to his childhood best friend.

They apparently communicated with each other for about four months before they went on their first date.

RELATED: THIS IS EXACTLY WHAT HAPPENS WHEN A SERIOUS GOLFER GOES ON A FIRST DATE WITH SOMEONE AT TOPGOLF!

Russell and Teil got engaged in 2014 on the Pitt Street Bridge, and they married on October 30, 2015, in South Carolina, where they currently live.

Teil, who was born in 1998, is an accomplished artist and works a full-time painter based out of Georgia.

She primarily focuses her work on animals, pool scenes and other still life, and she has her own website at teilduncan.com.

Teil attended Auburn University and she graduated with a Bachelor's degree in art.

Russell and Teil have two kids, Robert and Ruth.

The Henleys are said to have a combined net worth of $10 million.

NEXT PAGE: BRYSON ON REACHING A "STICKING POINT" WITH COBRA

PGA tour
Tiger Woods
russell henley
Sony Open
paige spiranac
Previous
Bryson DeChambeau on Cobra Golf: "We came to a bit of a sticking point in 2021"
Next
Hideki Matsuyama hits shot of the year so far to win Sony Open