Bryson DeChambeau on Cobra Golf: "We came to a bit of a sticking point in 2021"

Bryson DeChambeau admits there were some issues last year but things are looking much better heading into 2022 on the PGA Tour. 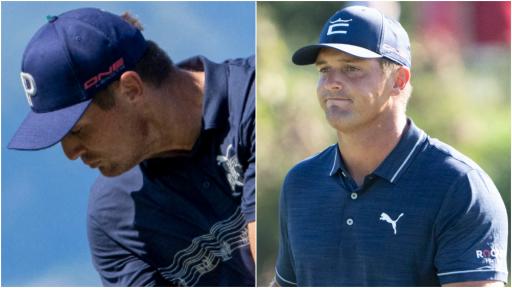 Bryson DeChambeau has revealed he came to a "sticking point" with his equipment sponsor Cobra Golf last year but that things have vastly improved heading onto the PGA Tour in 2022.

DeChambeau typically hits the headlines most weeks on the PGA Tour but one of his most controversial moments in 2021 was when he spoke out about his Cobra Golf Radspeed driver in July when saying "the driver sucks" following a poor start to The Open.

WATCH: BRYSON SAYS HIS DRIVER SUCKS AT THE OPEN

But after immediately apologising for his frustrated words at Royal St George's last summer, DeChambeau has worked tirelessly with Cobra Golf in finding a driver that works best for him.

After helping the United States trounce Europe at the Ryder Cup in late September and then finishing seventh in the World Long Drive Championship with multiple hits over 400 yards in early October, DeChambeau got to work with Cobra Golf on their new driver for 2022.

While we can't go into too many details about Cobra's new driver just yet, we can tell you it's special... and DeChambeau certainly agrees.

"This year I'll hit it even further," says DeChambeau, who is looking to achieve a 200 mph ball speed regularly on the PGA Tour.

"Once I get into some lower lofted heads that I'll be getting this week or next week, you'll be seeing some much longer drives."

He added: "We're getting close to having something that we can get working at 200 mph ball speed that will on work on Tour.

"I'm super excited and happy with Cobra. We came to a bit of a sticking point last year but we've worked together and burst through that wall."

RELATED: BRYSON REVEALS WHY HE REFUSED TO TAKE PART IN THE PGA TOUR'S NEW NETFLIX DOCUSERIES

DeChambeau could only finish 25th in the year-opening Tournament of Champions in Hawaii last week and he then chose to withdraw from the Sony Open earlier this week citing a wrist injury, which he claims had been bothering him for "three or four weeks."

He has dominated the PGA Tour driving distance charts for the last few years, and you can just about be certain he will be topping the stats again in 2022 - especially armed with his new Cobra Golf driver that you will get to learn more about very soon.

NEXT PAGE: IF THE PGA TOUR BROADCASTED AVERAGE GOLF COURSES - IT WOULD LOOK A LITTLE SOMETHING LIKE THIS!