Simola Golf review: Knysna golf course boasts one of the best walks on golf, and has a layout to match 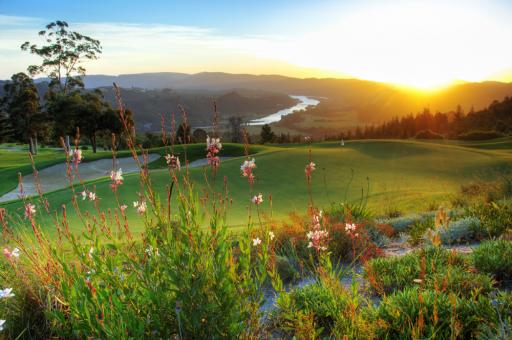 The second green at Simola

There is a reason the European Tour stops in South Africa four times this season. The cold of the UK winter and the unpredictability of spring means the Rainbow Nation is an apt getaway for the frustrated British/European golfer, thanks to premium golf courses in pristine condition for much of the year.

Furthermore - once you’ve budgeted in the flight - South Africa can be an economical choice thanks to cheaper costs all round - including golf.

And then there’s the food and drink, the latter of which is headlined by world-class wines at non-league prices. Oh, and there’s the outrageously stunning beaches, which are quiet and pristine. And there are loads of sports to watch live, and it’s actually affordable to attend. And there’s surf. I could go on.

For these reasons, there are a host of top-notch layouts. But if you’re looking for one with a bounty of beautiful, unique holes that will stay lodged in your memory for the rest of your years, there’s one in Knysna that should be top of your list.

For the Jack Nicklaus Designed Simola has that most cherished, elusive attribute of golf courses - character.

The third green, and looking down the third hole

Based on the famous Garden Route that runs along the south coast of South Africa, Simola Golf and Country Estate lives in the woods above Knysna in the Western Cape, keeping watch over the town.

Some three to four hours drive from Port Elizabeth and an hour or so from George, it is an affable settlement with a buzzing centre and plenty to keep everyone engaged off the course. It is a scenic area, as one can see from the photos!

The course is sunken into the ridges, meaning it is protected from the harsh winds that attack the coast. Even the Scots would find this place breezy.

Far from it. A stunning hotel and Spa and gym are alongside Simola Estate. There are a range of beautiful properties on offer around the course. There’s also a River Club for the estate’s residents.

With the ribbon cut in 2005, this Jack Nicklaus design has grown to be one of Africa’s best layouts, and one of the Golden Bear’s also.

For us, the greatest golf courses utilise the natural beauty of the surrounding land, rather than working the diggers overtime. If you can make it look like the former while doing the latter, bravo!

"As I walk the site, my top priority is finding features such as native trees, grade variations or natural wetlands that can enhance shot values or scenically frame holes,” Nicklaus said of designing golf courses.

“I let the environmental surroundings shape the holes, so they fit the terrain. I never try to force an idea onto a piece of land."

The views are quintessentially south African, and can rival any on the golfing map. With vistas down to Knysna river, the Heads, the lagoon and over the Outeniqua mountain range, you will spend time routed to the spot due to the sheer beauty of the region. A good walk spoiled? When this walk is of this standard, it's almost an impossible task for the course designer to match it. But Simola manages it.

A paralysing panoramic comes on just the second hole, serving as an aperitif for the coming round. Perched high up and looking down thunderously below, golfers see seven bunkers and a tantalising green in the distance. Reachable in one for some, but at this height it’s not easy to keep your mettle.

The opening seven holes have you on one side of the ridge, before players make their way around onto the other side, affording varying views throughout the round.

It’s a five par-five, five par-three, eight par-four design, with relatively wide fairways throughout. However, many of the landing areas are severely sloping, meaning you can easily run-off into the rough, and forcing you to play from a variety of lies. You are rarely left with a simple approach shot.

Overlooking holes 2-7 from the tee box

The doglegs encourage players to work their shots to obtain position A1, while brave boomers can try and cut out the trouble on some holes in order to gain maximum yardage.

One of the gravest challenges for designers is to construct a course both playable for the happy hacker and the scratch golfer, and perhaps Nicklaus’ greatest masterstroke is in doing both at Simila.

"...when I start to design a golf course, I don't intentionally try to make it as tough as I can,” Nicklas said. “ I simply aim to create a golf course that will be a demanding test of skill for the accomplished golfer playing from the back tees.

“But, at the same time, I want to offer a challenging, yet enjoyable experience for the average or beginner player who plays from the appropriate tees and thinks his or her way around the golf course..."

This ethos rolls over to the greens, which were in excellent condition, rolling true and fairly fast, but kept at a playable speed.

Fairways are carpetlike, bunkers are fluffy, and the rough is kept at what us Brits would consider a generous length - meaning you can actually get yourself back in play if you err from the fairway.

However, the drink is dangerous throughout. Strategically positioned water hazards will see most golfers take at least one trip to the well, especially on a windy day.

You know a course is among the best on offer when you start comparing following layouts to it. "This reminds me of Simola" has been a common phrase since I took on Knysna's finest in March. None have come close, mind.

This is a world class design, with views to match.