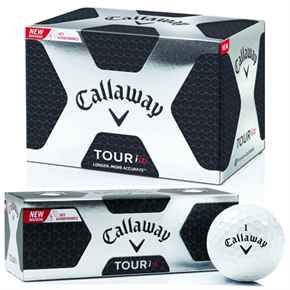 I was able to hit plenty of fairways after that reassuring crack off the face of my driver. It also gave me good distance with fairway woods and rescue clubs, enabling me to get closer to that elusive putting surface.

Control or distance...distance or control? That’s the question for most of us when we’re looking at golf balls - particularly now the weather is showing signs of warming up a bit.

Let’s face it, if you’re an average club golfer who just gets out to play whenever possible, the niceties of backspin, cutspin and drawspin pale into insignificance behind giving that small, round object a good smack up into the blue yonder and hopefully out into the middle of the fairway.

Frankly, you’re not going to spend hours perfecting your three-foot putts or getting the right amount of check and roll on your chip shots. When it gets to the weekend, it’s time to give that baby a ride – and it looks like Callaway know just what you’re thinking about with their latest Tour i(z) ball.

Even on the side of the box they describe it as “a ballistic missile” and “built for pure distance at any swing speed”. So, not much chance of compromise there. Callaway also claims it delivers improved spin separation - less spin off the driver for longer, straighter shots.

Indeed, I was able to hit plenty of fairways after that reassuring crack off the face of my R9 driver. It also gave me good distance with fairway woods and rescue clubs, enabling me to get closer to that elusive putting surface. It’s at that point you notice another difference - and perhaps more distance than control.

Chip and run shots are relatively easy but it’s more difficult to control the distance of pitches and high lob shots, despite Callaway’s claim that the ball’s skin is receptive to spin. It's a price I sometimes have to pay for getting that extra yardage – and a grin as I watch the Tour i(z) sail off into the distance.