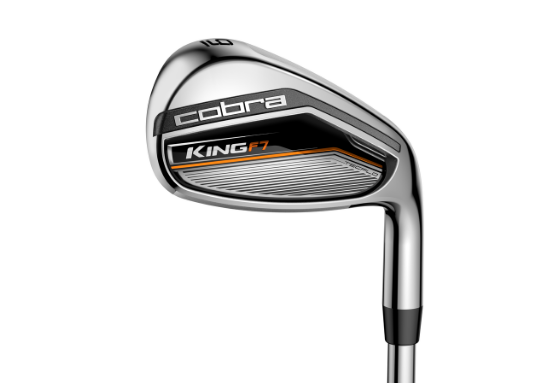 Cobra has been one of the big players in the golf game for a number of years, but it has been languising just outside the Champions League spots, doing its thing in the Europa League while planning an assault on the top of the table.

For years, the brand has been viewed as the plucky undercard, often bringing impressive products to market, but without an entire range to back it up.

In 2017, it arrives as a prize fighter with a range of irons, drivers and wedges that can rival anything on the market. And that's not all - in true Cobra fashion, everything looks awesome.

Cobra makes cool things that work - and the F7 iron epitomises this.

The head shape is nothing out of the ordinary, with a mid thickness sole and top line on show.

Flip the iron over to look at the back of the club, and there’s some signature Cobra ingenuity. Orange (this is Cobra after all) adds some colour, while the triangular and straight lines create an appealing design aspect.

It’s a funky aesthetic, but in no way is it overbearing or outlandish, which is often a criticism of Cobra gear from older players.

The F7 iron has an appealing, deep, thuddy feel - overall a meaty texture. It offers a good deal of feedback, and emits an understated thwack at impact.

Like the F6 product, the F7 line optimises performance in every iron by changing cavity construction and groove patterns throughout the set.

However, in this year’s range, PWRSHELL is employed, allowing designers to thin out the face and sole. They can therefore move CG lower, enlarging the sweet spot and optimising launch angles.

Going through the set, players will notice a large difference in spin rates, with shorter irons offering lots of sip, allowing players to control their approach shots.

The amount of forgiveness in the mid-to-long irons is superb, thanks to the full hollow design (3-5 irons) and half hollow design (6-7 irons) employed.

No matter where you strike from the face, and particularly if you hit low down, the F7 irons offers massive amounts of help, getting the ball in the air and out there with ease.

Perhaps even more impressive is the amount of control built into the iron, which will appeal to the better ball strikers.

Thanks to the high performing grooves, CG location, and variable construction designs, players should be brimming with confidence over the ball, whether you want to play knock down shots, manipulate the flight, of add heaps of spin.

It performs well in the distance stakes, but is by no means the longest iron on the market. Players will enjoy a couple of yards extra yardage compared to the F6. 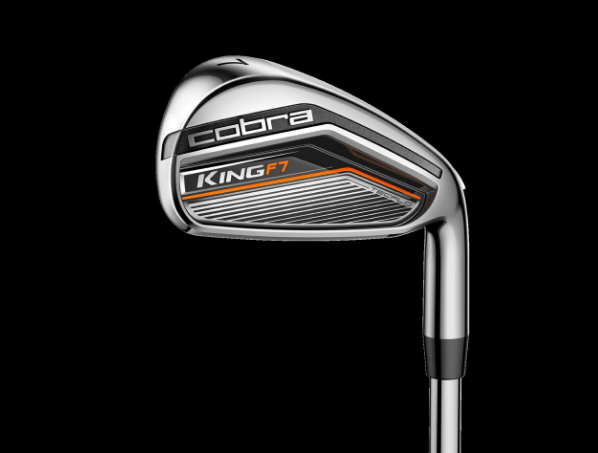 The Cobra KING F7 iron is forgiving and offers loads of control, which will tick boxes for the mid to high handicappers.

Building on last year’s popular F6 model, each iron is optimised once again to maximise performance, while new technology comes in to play, such as PWRSHELL, allowing for a larger sweetspot and more distance.

An iron that will have mass appeal, and should get new players on the packed Cobra band wagon.