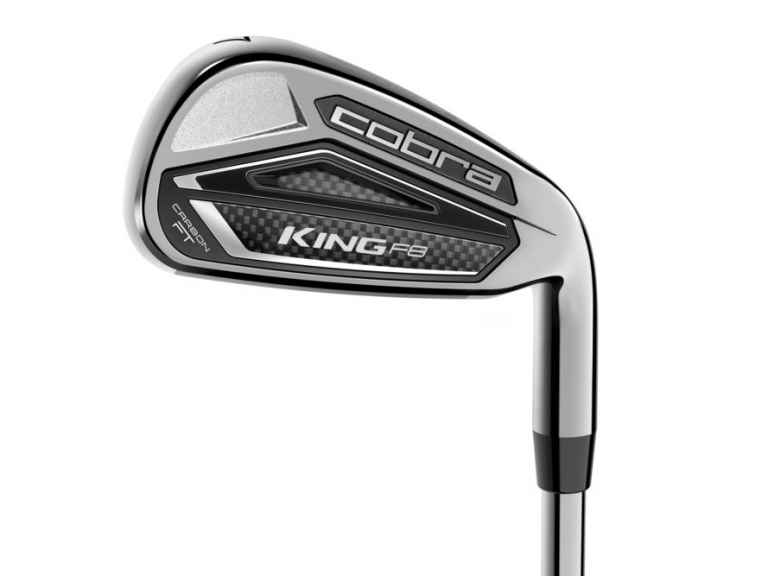 For the first time, Cobra has released a set of irons with Cobra Connect, allowing golfers to make smarter decisions on the golf course.

But don’t let that overshadow the performance of this irons - because even without the added tech in the butt of the grip, this would be a leading wrench.

The back of the club does add a touch of pizzaz. The carbon fibre gives it a modern edge, and the all-black look is awesome. Overall, a fairly clean aesthetic, and an improvement on the F7.

Less game improvery compared to the F7. The feel is more sophisticated, purer in 2018, while also offering more feedback.

First let’s talk about distance, because the King F8 packs a punch. The PWRSHELL face seems to do the job, because we saw an increase in both ball speed and carry distances.

The long irons are hugely more forgiving compared to the shorter irons, while we felt in complete control with the short irons in hand.

In the forgiveness stakes, it’s around the middle of the pack compared to other game improvement irons. Beginners will probably want more help, but for mid handicappers there is enough forgiveness in there.

Compared to other game improvement irons, there is a lot of workability available.

Very simple to use, and providing easily digestible data. Players will be able to see where they are going wrong - or right - with their iron play, which should allow them to improve.

The only issue we have had with the Cobra Connect system is that it can drain the battery on older phones.

A long iron that offers consistent yardages. Feel has been improved for 2018, making this a leading iron.

Probably more suited to mid handicappers rather than complete beginners, as there are more forgiving irons out there.

An excellent new iron from Cobra, that should prove popular.