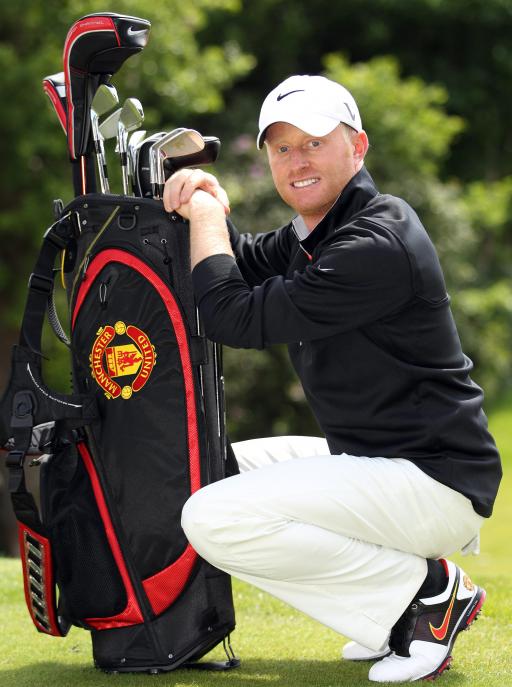 The four-time European Tour winner will slip on a pair of Manchester United-logoed Nike Golf Lunar Control golf shoes and a logoed Dri-Fit Tech black polo shirt on one of the opening two days at Wentworth, to celebrate Nike’s sponsorship of football teams across Europe.

Dyson is likely to stir up some banter among his fellow professionals and fans with his new lightweight Nike Collegiate Carry Bag, emblazoned with the Premiership-winning team’s club crest - but then again, we are in Surrey.

“I love the idea of being able to show off your sporting allegiances in other contexts but I’m sure I’m going to get a bit of stick,” said the football-loving tour pro from Yorkshire. “But I have supported United since I was a boy, so I feel I’ve earned the right to wear the crest.”

Dyson could not have chosen a better time to show off his colours, with his team’s appearance in the Champions League Final at Wembley this Saturday, yet he hopes to have a pint in his hand alongside United-mad fans Graeme McDowell and Rory McIlroy well before 7.45pm.

“I’m not sure where I’ll be watching the match yet, but I’m hoping I’ll be off the course in plenty of time to see the kick-off, whether it be in the clubhouse or whichever bar we end up in,” added the 33-year-old Englishman, whose uncle played for Spurs.

“While I would love a late tee time on Saturday as that will mean I’m in contention, I hope to have time to get to watch the match.”

Nike also sponsor a number of Europe’s elite, including Arsenal, Celtic, Barcelona, Juventus and Inter Milan – and will be bringing out a range of football team-logoed golf gear later this Autumn, featuring shoes, polo shirts and golf bags.

All Nike footwear and bags will go on sale in pro shops and high street retailers from November, while apparel will only be sold at football club stores and online stores including www.nikestore.com, in the initial stage.