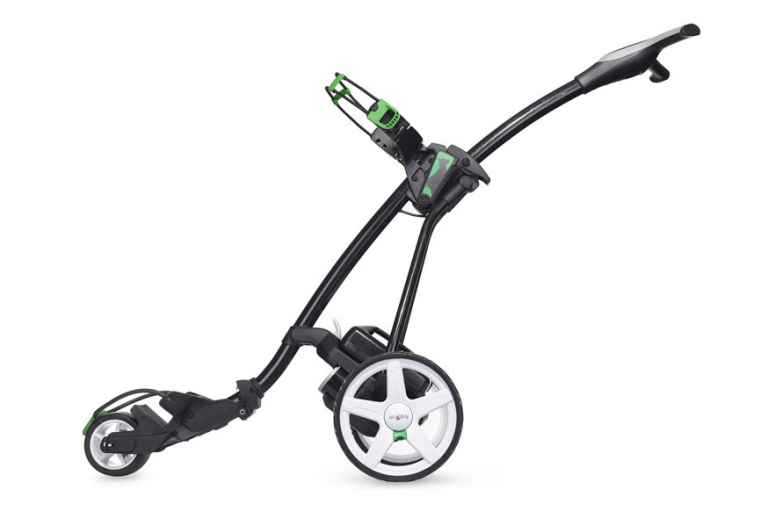 In the market electric trolley market, the Hill Billy is unrivalled in the value for money stakes. But when value is among the unique selling points of any product, you expect to find inferior elements at some point.

Marketing alone is enough to drag some to the till, wallet bulging with receipts, as they splash on the latest, and self-confessed greatest product.

But then there are the others. Those who value substance over style, or at least look at the price tag before considering reaching for the credit card. The Hill Billy is aimed at these people.

In essence, the question you want answered, is how much does one compromise when buying a Hill Billy trolley compared to more expensive products?

Opulent aesthetics and mod cons are done away with, allowing the brand to keep costs low, which is relayed to the consumer.

In the appearance stakes, it’s no Pablo Picasso, but in no one’s book is it Primark either.  The simple black, white, and green colour palette will appeal to most, and the contrast between matte and sleek finish creates an appealing contrast.

Consumers can choose between six colours, including orange, pink, blue, red, white and green, the original.Compared to push products, electric trolleys are larger, when assembled, and heavier on the whole.

When collapsed, the trolley weighs over eight kilograms, which is around par for the course. While older users wouldn’t want to be carrying it up too many flights of stairs, golfers should have no issues transporting it short distances.

When unfolded, the Hill Billy is similar in width to other electric trolleys. While you may not be able to slither in between trees in the deep rough (you shouldn’t be there anyway) the size and width shouldn’t cause any consternation.

When it comes to assembling and collapsing the product, the brand’s two-click, three-way folding system makes the process simple. It takes seconds, and importantly without too much strain, to fold and unfold the Hill Billy.

To fasten a bag in place, a strap at the top and bottom of the bag holds it in place, and the anti-twist base ensures it stays in place no matter how bumpy the ride. We tested the product on a variety of bumpy terrain and at numerous gradients, with the bag holding firm at all occasions.

The wheels, which are attached and removed easily, are light and sturdy, although it’s worth upgrading to the winter tyres if you are going to be playing through the winter months. The greenkeepers will thank you as well – wheel spins should remain in the car park.

The Hill Billy boasts a soft start, that it to say it when it starts moving it crescendos into the speed required, rather than racing off and leaving a bemused golfer behind.

Top speed is around six miles per hour, which is plenty fast enough no matter how gay your gait. The Hill Billy uses a simple “stop/start” button, which when twisted changes the speed. This is located on the top of the handle, which is adjustable allowing shorter and taller players to enjoy the product alike.

Batteries are the most important part of any electric trolley, as without them you’re going to be pushing. Acid and lithium are the two options, with the latter weighing 4.5 kilograms less. The trolley accepts both batteries, allowing players to upgrade at any point. A handle allows users to transport the battery with ease, and the Plug ‘n’ Play system means it can be slotted into position without having to mess around with wires.

To charge, the battery should be docked, and the brand suggests it remains plugged in at all times, in order to maintain battery life. Rather than continually milk electricity, the battery tops itself up every time it loses charge, ensuring it’s ready to go with full battery life when needed.

Reliability. Performance. Price. These are the three areas in which the Hill Billy electric trolley excels.

The illusionary bubble blown by marketing is satisfyingly popped, offering the consumer a no thrills

product that does what is needed.

Easy to assemble and fold, the Hill Billy is stable, and holds a bag I place no matter the terrain. The

battery can be removed and slotted into place with easy thanks to a Plug ‘n’ Play system.

You’re getting a whopping bang for your buck with the Hilly Billy electric trolley.

Head to the Hill Billy website for more information.