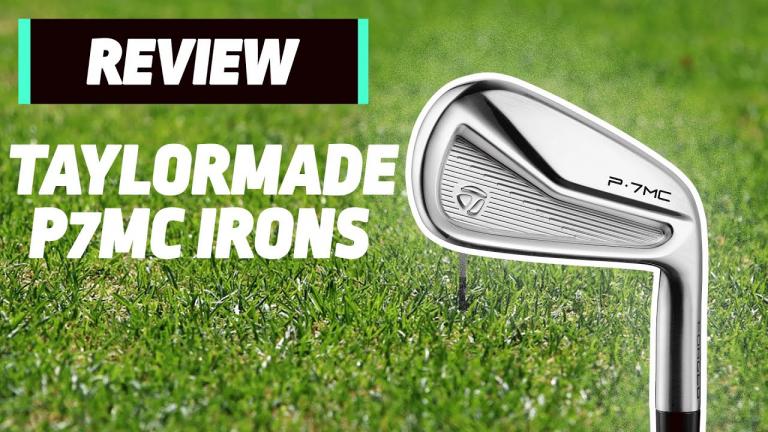 The new TaylorMade P7MC irons were recently announced as one of the latest irons to join the highly successful P-Series range. The P7MC feature a minimal offset and in our opinion are the perfect option for single figure handicap golfers.

Derived from the previous generation of P750 irons, the new P7MC irons feature a new backbar geometry design to enhance and elevate feel, with mass being moved up behind the face to support the point of impact.

From a design perspective, TaylorMade has once again mastered a classic and elegant finish that wowed the GolfMagic team as soon as we unboxed the P7MC.

Rory McIlroy absolutely loved the solid feel of the P7MC when testing the new irons and for GolfMagic equipment testers Jack and Alex, it was no different.

Watch the video below for our in-depth review of the new TaylorMade P7MC irons:

ABOUT THE TAYLORMADE P7MC IRONS

Inspired by Tour, the design features of P•7MC meets the standards of the game’s most discerning players. Classic shaping and minimal offset deliver control and precision, while perimeter weighting offers just the right touch of forgiveness.

The shape of this new muscle cavity was derived from the previous generation of P•750 irons – which has a cultish following on Tour as a favourite of Jon Rahm, recently crowned PGA Championship winner Collin Morikawa and Matthew Wolff alike. In creating the new backbar geometry designed to elevate feel, engineers moved mass up behind the face to support the point of impact.

During initial testing, Rory McIlroy immediately commented on the solid feel of the iron and the stability of the head through the strike zone – a discernible enhancement over the previous generation.

A forged pattern within the cavity back pays homage to a long history of TaylorMade iron designs including the RAC TP blades as well the original P•750 and P•770 models.

A subtly placed “T-Bug” with a high-buff finish is formed during the forging process as a sophisticated nod to craftsmanship and aesthetics. Completed with a Tour satin finish and muscle cavity geometry, P•7MC will visually match either P•7MB or P•770 in a combo set. P•7MC – Specifications,

Looks - 8/10: What GolfMagic really loved about the design of the TaylorMade P7MC was how the brand managed to feature a rather large cavity whilst still keeping the minimalistic players appearance that so many golfers love to see. The combination of a decent amount of cavity, blended with a thin topline at address and minimal offset, makes the P7MC extremely appealing to single-figure golfers.

Performance - 9/10: After testing the P7MC irons at Farleigh Golf Club, the GolfMagic team was extremely impressed with the feel and performance of the new irons. Although the thicker cavity does provide players with a little more forgiveness, these irons are still designed for low handicap players and TaylorMade Tour players, so if you're looking for maximum forgiveness, these aren't the clubs for you. The irons felt pure out the model and they were extremely responsive with mishits. The workability of the P7MC irons was something we really liked about them, so if you place a premium on shot-shaping, you'll definitely be a fan of these irons.

Overall - 8.5/10: Although these irons are designed for very good iron players and TaylorMade's Tour team, the versatility that these irons provide will suit a lot of single-figure players. The beauty of the P-Series range is the ability to make combo sets and we feel like the P7MC irons could be included in a lot of players' bags.

For more details of the TaylorMade P7MC irons, make sure you watch our video review attached to this article.