GolfMagic puts the brand new TaylorMade SIM2 drivers to the test, which are already in the bags of the likes of Rory McIlroy, Dustin Johnson and Tiger Woods. 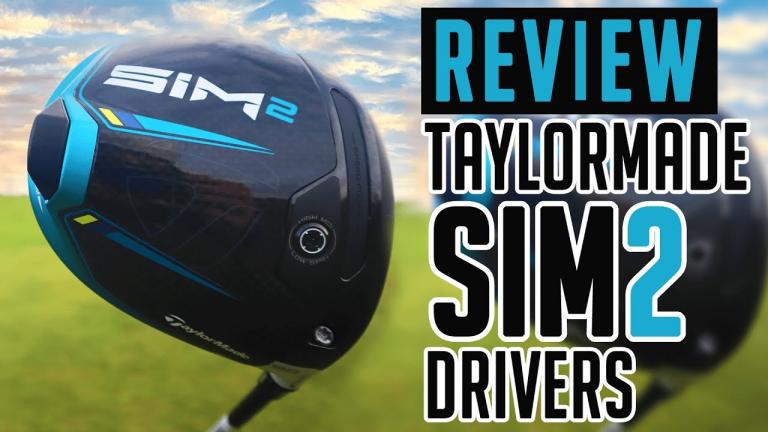 Improved aesthetics, phenomenal forgiveness in both models, a true and honest upgrade on the previous model
Our score:
Overall:
5
PRICE: £449.00 YEAR: from 2021

TaylorMade has unveiled its new SIM2 range, of drivers, fairway woods and irons. You might have already seen a few sneak previews of the new drivers in the hands of PGA Tour stars Rory McIlroy and Tiger Woods, but with the official launch now underway, we can tell you everything you need to know about the brand new drivers from TaylorMade.

The new SIM2 range includes three models, the SIM2, SIM2 Max and SIM2 Max-D, all offering something unique to help improve the tee shots of any golfer, no matter their level,

WATCH OUR REVIEW OF THE NEW SIM2 DRIVERS BELOW:

As the defining component of SIM2, SIM2 Max and SIM2 Max•D, the forged aluminium ring is one of four crucial elements of the unique construction – each serving a vital function that allows the driver to be forgiving, fast and powerful. The other modules are the carbon crown, carbon sole and milled back face cup.

Want to know all the details about the technology behind the new SIM2 drivers? CLICK HERE.

What's the difference between the three models?

SIM2: Traditional driver designs come with a trade-off, but TaylorMade journeyed beyond tradition to obtain power, speed, and forgiveness in a low spin driver. The reconstructed SIM2 delivers high MOI properties with a heavy 16g steel weight positioned on the Inertia Generator. The TPS Front Weight is strategically located behind the face to encourage optimal launch with low spin characteristics, delivering complete performance that is low on spin and high on forgiveness.

SIM2 Max: With an intense focus on speed and forgiveness, the SIM2 Max delivers high MOI properties with a heavy 24g tungsten weight positioned on the Inertia Generator. The TPS Front Weight is strategically located on the sole of the club to encourage the optimal mid-to-high launch with mid-to-low spin properties, delivering complete performance and max forgiveness.

SIM2 Max•D: Traditional draw-bias drivers come with a trade-off, sacrificing forgiveness for a left-to-right ball flight. The all-new SIM2 Max•D features a repositioned Inertia Generator that’s closer to the heel, encouraging a heel CG that’s low and back for more forgiveness – designed to deliver a higher launch with the largest, most forgiving face in the SIM2 line-up. The end result, a draw-biased driver without compromise.

The SIM2 range is an evolutionary step from the previous SIM model that we became accustomed to last year, so in terms of the aesthetics, there are of course a lot of similarities.

The main noticeable difference is the new enhanced blue colour scheme and the additional carbon used to save weight. We think the upgrades are definitely an improvement on the previous SIM model and the colourways certainly make it look a lot more modern and if anything, slightly futuristic.

In terms of shape, it's almost identical to the SIM model which we at GolfMagic are very happy about, as we love the aerodynamic and compact head that you get with this driver range.

Another change in the design of the new SIM model is the Speed Injected Twist Face, which is now in the toe of the club instead of face.

A complete redesign with the SIM2 wouldn't have made much sense, given that it's part of the original SIM family and the previous model was so successful, so it's a straight 10/10 from GolfMagic when it comes to the aesthetics of the SIM2 line.

Improving on the previous SIM model in terms of performance was always going to be a tough task, given the success of last year's model.

If you have the old SIM driver, the new model won't add 10 yards to your game off the tee and that's not something that the brand are shouting about, but in terms of forgiveness, the SIM2 range has a lot to offer.

After testing both the SIM2 and the SIM2 Max drivers, the forgiveness was absolutely incredible, with our tester Alex barely missing a fairway no matter where he was hitting the ball on the club face.

The new SIM2 driver is still one of the longest available on the market, but there are a few other drivers released this year that may give you a few extra yards and a little more ball speed, it all depends on your game.

Something that really stood out when comparing the original SIM and the new SIM2 driver is how versatile the new model is. Last year's SIM was TaylorMade's low spinning model that really only suited the better player, but this year's SIM2 could go in the bag of a vast range of golfers, whether their handicap is high or low, due to the combination of low spin and excellent forgiveness.

The SIM2 Max was a little more forgiving than the SIM2, but to be honest not by much, which just goes to show how good of a job the brand has done at making their fastest model so forgiving.

Something we applaud TaylorMade for with the new SIM2 range is their honesty. TaylorMade isn't telling you that this is something brand new for 2021, it's simply an improvement on the previous model, which happened to be one of the most successful drivers ever.

If you want to learn more about the data behind the new SIM2 models and see what sort of distances and speeds Alex was getting, make sure you watch the video attached to this review.