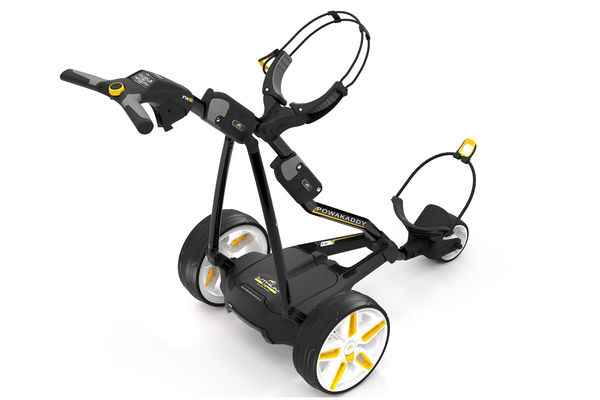 PowaKaddy has ramped up its Freeway range for 2017, featuring the sleek new FW5i.

Available in white and black, it’s certainly a premium looking product. Nothing garish or flashy, just sleek and stylish.

Partnered with a Premium cart bag from PowaKaddy, it takes aesthetics to the next level.

Ask most people why they don’t use an electric trolley, and they’ll say it’s too much bother. That is why PowaKaddy developed the Plug ‘n’ Play system, which negates the need for nuisance wires, and makes the whole charging process much simpler.

Plug the lithium battery - which is the thinnest on the market -  into the charger, then slip it into the bay. It couldn’t be easier.

New technology also means the battery discharges less during each round of golf - and it comes with a five year warranty.

We strongly advise golfers shell out on lithium batteries rather than acid; they charge faster, are lighter, and last longer...but they do cost a little more initially.

The trolley is a tad cumbersome to carry, with no obvious handle to take it around with, but it's comparative to other electric trolleys on the market.

However, once you have the trolley out the car, it takes seconds to erect or dismantle, requiring users to pull only two levers before it springs into life.

Two elasticated bands secure the trolley into position, and you’re good to go.

A new feature is the colour display in 2017, which shows speed, power and battery fuel. Designed beautifully, this shows golfers the essentials.

The trolley moves through the gears seamlessly, and we had no issues with balance or slipping as we played.

One annoyance we found with many electric trolleys that stick to one speed is that they speed up going downhill, and slow down uphill, which means you are required to constantly change walking speeds while playing.

Automatic Distance Function (ADF) allows users to send their trolley 15, 30 or 45 yards, and it’s easy to lock the trolley into this mode.

The front wheel can easily be realigned if need be, while the two main wheels pop off easily.

The USB charging port under the handle allows users to charge their phone while playing.

New for 2017, the colour display is an appealing addition, as is the ADF system.

Incredibly simple to erect and collapse, and generally very simple to use.