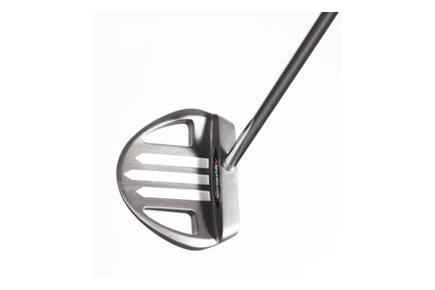 Taking up my stance with the Riviera, immediately tends to make me feel that my head is in the correct position and as it should, above the ball.

Benross Golf says its Pure Red series of putters have been designed for the golfer who wants a classic-looking putter with the benefits of modern groove technology. The Pure Red Series has a variety of toe/heel-weighted, centre/heel-shafted and blade/mallet heads to suit the demands of any golfer. The V-shaped groove pattern conforms to R&A rules and, the makers claim, this helps grab and impart top-spin as putts are struck. All putters in the series have a 3-degree loft. Other Pured Red putters in the series include Medinah, Pinehurst, Spyglass, Bay Hill - though why feature another well-known brand puzzles me - Valhalla, Sawgrass and Oakmont.

Looks: Taking up my stance with the Riviera, immediately tends to make me feel that my head is in the correct position and as it should, above the ball. The three white alignment stripes are a feature of all the Pure Red series are particular prominent on this model. The slight kink in the stepless shaft and its location in the heel help to instill confidence a strike on target.

Feel/performance: A crisp strike from soft aluminium face insert is assuring, though I was initially concerned it might not have a positive enough feel for holing short putts confidently. However, the top spin imparted by the milled face tends to encourage short, tricky putts to chase into the hole at a good pace. Take care, though, not to overhit longer approach putts as the extra roll can catch you out and test your nerve with the one coming back!