Features Suspended Face Technology (SFT) -dual-density insert that helps disperse weight to the extremities of the face for higher MOI and uses ribs of material embedded in a softer insert to deliver responsive feedback at impact. Available in three other models - the NCX-RAY Tau Blade (with Plumber's Neck), the NCX-RAY Sigma (Geometry Mallet) and the NCX-RAY Beta (Small Mallet). 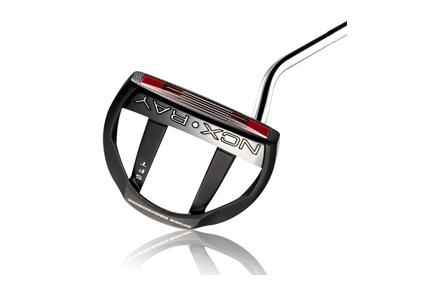 The pros probably don't miss-hit putts too often, though they might on longer ones and that's why the NCX-RAY putter is attracting such attention

I knew it wouldn't be long before someone else latched on to the new and distinctive NCX-Ray putters from Never Compromise, the brand that shares the same equipment stable as Srixon and Cleveland.

I've only had the NCX-RAY full mallet putter in my bag for a couple of rounds but already I'm taking full advantage of the extra roll it's giving me on greens that are getting faster by the day in the warm and sunny conditions most of us are experiencing.

The same apparently goes for new PGA Tour star Steve Marino, who finished second at The Crowne Plaza International at Colonial on the US PGA Tour at the weekend, using an almost identical putter. And Vijay Singh tied for sixth in Texas using a belly-length version of NCX-RAY Sigma that he's had in his bag since the US Masters.

Marino apparently shot 63 in a pro-am, the first time he used the NCX-RAY mallet, thentried the Sigma and switch back to the full mallet after missing the cut at The Players Championship.

Both the NCX-RAY Full Mallet and NCX-RAY Sigma models are face-balanced mallets with double-bend shafts. A lightweight red polymer is inserted into the face to save weight around the head then metal ribs are embedded into the polymer.

With the re-positioned weight increasing the MOI (Moment of Inertia) to keep the head stable and the ribs helping to get the ball rolling and create more feel off the face, the combination tends keep the head square through impact and delivers a little top spin on the ball.

Never Compromise engineers have christened it 'Suspended Face Technology' (SFT) - designers just love using abbreviations that roll off the tongue.! They're not the C-Grooves of Yes! golf putters, they're not the horizontal grooves of Rife putters, nor grooves with face inserts similar to GEL or Rossa putters but as the name suggest they ARE a compromise.

As Marino says: "If you were to take the technology from all the bags around the practice green, this putter would have everything combined into one putter."

According the Never Compromise engineers, NCX-RAY ranks No.1 for converting putts from off-centre hits, which infers you get the same roll from a miss-hit as you do from the sweet spot. And I can certainly testify that on . several occasions I didn't feel I hit puts spot on but the ball still rolled on line and sometimes unexpectedly dropped in the hole.

The pros probably don't miss-hit putts too often, though they might on longer ones and that's why the NCX-RAY putter is attracting such attention.