Should the new FootJoy shoe be a part of your DNA? Find out here... 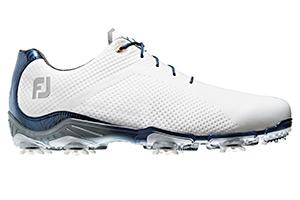 FOOTJOY has made no qualms about it. The new D.N.A. is very much the biggest shoe launch in its illustrious history... and it's easy to see why.

Although the D.N.A. (standing for DryJoys Next Advancement) was only unveiled this morning, I've already tried and tested the sleek new shoe in white/liquid navy, and while it may have been a fluke, I fired my best round in more than three years when sporting them for the first time last week.

Sleek and athletic, snug and comfy, lightweight yet stable. D.N.A. had been sold to me quicker than I could say Deoxyribonucleic acid.

Featuring the most comprehensive feature package ever delivered by FJ, D.N.A. footwear represents the most proven elements of the world-renowned DryJoys footwear family with all-new, cutting-edge componentry and construction methodology for the very best in performance.

The name? Well it's pretty contemporary and has a nice ring to it. FJ has pulled away from it's incredibly successful DryJoys but has still provided a connection to it. Nice touch.

The D.N.A. shoe is ideal for the serious golfer who is looking to improve his or her game and understands how important golf footwear is becoming in 2014.

D.N.A. is by far the most athletic shoe I've seen come out of FJ Towers, but at the same time, I don't believe it will detract the more traditional player. I think we're going down the route of lightweight, stable and athletic-looking shoes anyway. There's quite simply no age limit to wear shoes anymore.

What I like most about the D.N.A. is that the shoe works well with the foot and has the best balance of lightness and stability I've ever worn before. It's not the lightest shoe on the market, weighing in at 420g, but it's the correct weight in my book. It's not too light, it's not too heavy, it's just right - and lighter than many other successful FJ models.

Then there's a bunch of key features and benefits to get excited about - teasers which we sent out on our Twitter feed in recent weeks - including 3D FoamCollar, SnugFit Tongue, NitroThin TPU Outsole, Xtra-Thick FTF FitBed and Chromoskin Leather System by Pittards.

Of the key features, the most impressive for me during my first 18 holes with the shoes on was the NitroThin TPU Outsole and Xtra-Thick FTF FitBed.

The all-new NitroThin TPU outsole has been in development for several years, undergoing numerous rounds of testing and technical modifications, and it shows. The result was a super thin-yet-strong outsole that frames the soft, FTF internal midsole to deliver the perfect combination of stability and flexibility for maximum on-course performance.

The Nitro last provides an ideal low profile and as there's no midsole, the Xtra-Thick FTF thickbed is a necessity to provide that sense of in-shoe stability and premium cushioning. Two densities of Fine-Tuned Foam were therefore utilised by FJ - a firmer density for stability around the perimeter of the FitBed and a softer density in the heel and forefoot providing industry-leading in-shoe comfort.

I also think the 3D Foam Collar is a nice touch as when you put the shoe on, it rebounds to fit and holds the foot in the heel area, while the new SnugFit Tongue, featuring Micro Vent technology, is remarkably thin, soft, light and comfy as it rests on top of the foot.

The leather is also of very high quality with exclusive Pittards of England Leather. Despite walking in wet, muddy underfoot conditions, the leather upper was waterproof, supple, durable, thin, yet strong.

If there's one slight negative - and I'm clutching at straws here! - I'm not a fan of how you can see part of the front cleat while standing over the ball. Not that it matters too much, as you should be focused on the ball, but it's a little strange. Then again, the Stealth cleats, using the PINS insertion system, provide tremendous traction and so I have to thank them for that.

Yes, it's not cheap at £150 for the standard version and £165 for the BOA model, but given the key features and benefits you gain, I believe this shoe should be very much part of your D.N.A. in 2014.