What do we make of Mizuno's latest game improvement iron? 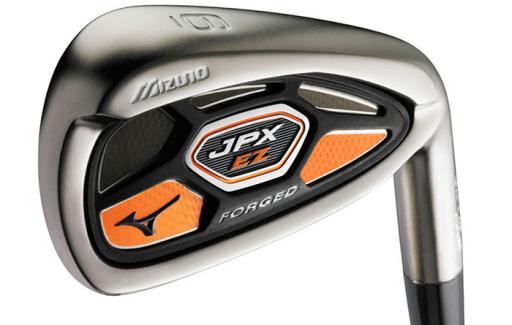 The style of the Mizuno JPX-EZ Forged has become very popular over the last few years, because it offers what many golfer are looking for: feel, looks, performance and forgiveness.

It is because of these features that the JPX-EZ Forged can be appealing to a variety of handicaps - but with the multi-thickness CORTECH face, the ball speed across the face has been increased from previous models, which allows for maximum distance.

Mizuno’s JPX-EZ Forged iron is a departure from the company’s traditional chrome and satin-finished iron. I'm a big fan of the black-nickel plating that gives the irons a dark finish and bursts of bright orange in the cavity that begs a closer look. The dark gun-metal finish is a nice touch. It's different and not something I'd necessarily expect from Mizuno.

The cavity is not as big as the standard JPX-EZ iron, which won our under £400 iron test, but it's certainly not as classic in its design as the MP irons designed for better players.

The subtle differences between both new JPX ranges are that the Forged offering has a varaible thickness on the face which is thinner in the middle and thicker on the outside.

It's a very soft feeling iron, despite the aggressive looking cavity back on offer, but nothing like an MP iron. Sound at impact through Mizuno's innovative Harmonic Impact Technology provides a soft, yet crushing blow at impact. It's more of a 'pop' sound at impact like the MP-54.

Mizuno has installed a new, lighter shaft that felt very responsive. The standard True Temper XP 105 is a shaft I feel works best for the entry level player with slower swing speeds.

The fiery orange colour choice becomes particularly apt given the hotness off the face. Terrific launch angles, to be expected by the 28-degree on offer, and above-average distance.

Not as forgiving as the maximum game improvement JPX-EZ iron but forgiving enough and a little longer. Decent workability on offer, too.

Easy to keep the ball low under the wind, and easy to work a draw. The slight offset favours a right-to-left shape and should help players that tend to lose the ball to the right in the air. That's not quite as easy on the standard JPX-EZ.

The difference in performance between both JPX-EZ and JPX-EZ Forged varied little, but personal preference would be for the Forged range given it provides a little more workability and solid ball striking across the board.

Click here for Mizuno JPX-EZ Forged iron owner reviews. Click this link to see how the JPX-EZ Forged performed in our 10 of the Best: Game Improvement Irons over £400 test.