2014 v 2002: How many yards did Golfmagic's Andy Roberts gain when pitting the new Callaway drivers against one 12 years old? 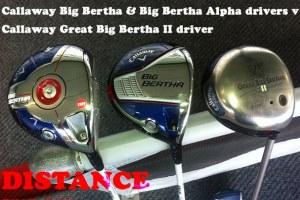 The new Big Bertha driver for 2014 is a total performance driver that debuts the brand's Adjustable Perimeter Weighting - an innovative sliding 8g weight that can be moved around the perimeter of the driver head to help individuals produce longer, straighter drives.

According to Dr Alan Hocknell, Callaway's R&D chief, the APW rail is located at the back of the driver because wherever weight is on the head, it stays on the edges. That, he says, provides a 20% higher moment of inertia (MOI; resistance to twisting) for more forgiveness and an infinite number of draw and fade bias options. I favoured a 2-degree fade bias, as that produced my best results.

The Big Bertha Alpha driver for 2014 is the first driver to enable independent adjustments of four significant performance characteristics, optimising trajectory, control and distance for individual golfers. The Alpha model contains an innovative Gravity Core that fits in a carbon tube in the head that connects the crown and sole. It has a glass fibre-reinforced body that weighs in at just 1.5g connected to a tungsten end weighing 10.5g. Either end of the core can be inserted into the clubhead, allowing golfers to raise or lower the centre of gravity (CG) and thereby alter spin rate.

Unsurprisingly when it comes to the Great Big Bertha II driver of 2002, there are no such gadgets and gizmos to mess around with. The GBB2 features a larger, updated version of the original Big Bertha driver of 1998 with a 380cc titanium head as opposed to the 460cc drivers of today - which back then Callaway said offered the "perfect blend of power and forgiveness."

The brand also explained back then how the GBB2 driver's increased MOI limited the clubhead twisting on off-centre hits. And that was pretty much that when it came to the press release. Wow, being an equipment writer back then was easy work!

Much to my surprise, the Great Big Bertha II driver didn't finish too far behind the new Big Bertha and Big Bertha Alpha drivers in the distance stakes. Well it did, but not anywhere near the gap I expected for a driver that is separated by 12 years.

The sweetspot of the GBB2 is much smaller but it's still big enough to give the ball an almightly crack off the tee. The sound, on the other hand, is horrible. Sound and feel is the most noticeable difference at impact. The standard GBB System shaft provided very little feel or control and was much harder to control than the standard Mitsubishi Rayon Fubuki shafts found in the other two drivers.

GBB2 provided a surprisingly high, penetrating ball flight, however, and although distance was shorter than both Callaway's new big sticks, drives weren't too tricky to hit down the intended target line.