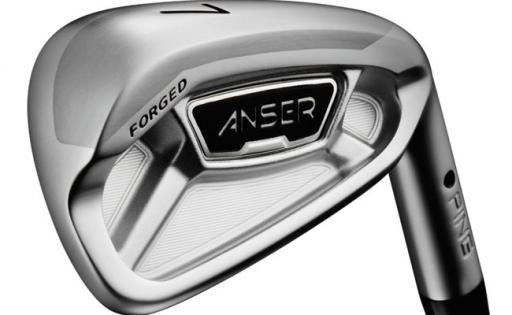 PING is back with the updated version of its debut forged range.

Remember, we are offering some fantastic prizes in return for reviewing your own equipment. Follow @Golfmagic and like our Facebook page for all the latest golf news, views and reviews.

THE big talking point of the new PING Anser family might be the brand’s debut adjustable driver, but the second edition of PING’s first forged irons in many a year is causing quite a stir, too.

On first looks, the head is a lot cleaner than the old model and features an impressive stabilising bar which changes through the set.

Aesthetically, the Anser isn’t too dissimilar to last year’s i20 – and this goes for performance as well, albeit the Anser offers that forged feel for golfers who want it.

PING tells us the forgiveness of the Anser is a little less than the i20, while they are also a little less offset. As someone who has been playing the i20s since launch, I can certainly vouch for the forgiveness. For me, the i20 is slightly easier to hit and with a higher trajectory.

PING has already admitted it doesn’t expect to sell a lot of these irons in the UK and they are aimed at the premium markets of Continental Europe and Asia. Understandably so as there isn’t a lot of difference in the performance between the Anser and the i20s – with the latter coming in at a fraction of the cost and offering more forgiveness.

I cannot fault the quality and performance, which are everything you expect from a PING iron. But I can’t see a lot of people outside of the professional game putting these irons in the bag.

If you want an iron that performs like the i20 but gives the forged feel, these are the perfect option, but the price will scare a lot of potential buyers off.

Follow@Golfmagicand like ourFacebook pagefor all the latest news, views and reviews.