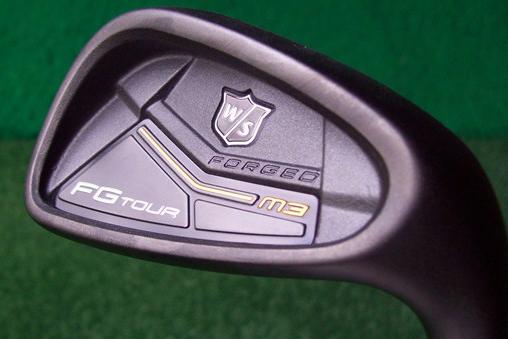 The M3 iron is something a little different and certainly new for Wilson Staff. While we've come to see this sort of finish in an iron several times from other manufacturers, like the PING G25 for example, we've rarely seen it in a forged head like this 8620 carbon steel product.

While Wilson Staff claims the M3 iron is verging on a better player product, I personally believe an 18-capper would thrive on this club. Don't let the thin topline and compact look of this club make you think otherwise!

The FG Tour M3 iron is a direct replacement for the original FG Tour, yet the V2 will remain a current offering, which is pleasing considering just how much I enjoyed it earlier this year in our 10 of the Best: 2013 Player Irons Test.

This revamped model for 2014, however, is slightly larger (longer and taller with a wider sole) and more forgiving than the design it replaces. M3 also has a little more offset and a rounded shape with more sole radius and camber than the original FG Tour.

Looking down on the ball in blazing Surrey sunshine out at Wentworth Golf Club, the FG Tour M3 ticked all the right boxes for appearance. The attractive new dark, non-glare look eliminated reflection and really helped me focus on the shot in hand. A big improvement in the apperance stakes on the much-too-shiny-looking FG Tour V2.

Maybe it's just me, but I also thought the ball looked visually clearer against the black face and that inspired a little more confidence at address.

In terms of feel, the M3 felt particularly sweet. I received a nice muted sound at impact and decent feedback on off-centre hits. When I hit one out the centre, I had to look down to make sure I actually hit the ball. Pure, indeed.

M3 features a progressive cavity design that moves weight lower and further away from the centre of the face in the long irons, perfect for the low ball-flighted player like myself. I enjoyed higher launch with the longer sticks as well as an abundance of forgiveness that I simply couldn't argue with.

The short irons occupy a centre of gravity that is higher in the head and closer to the middle of the face to provide a more penetrating flight and workability, and once again, particularly forgiving. Distance control with the scoring clubs was perfect.

The Standard True Temper Dynamic Gold XP steel shaft felt solid, as always. Higher initial flight with a controlled ball flight perfect for when the wind picks up. The club can also be purchased in Aldila RIP Phenom 95 graphite.

Wilson Staff is well and truly living life in the fast lane right now, and the M3 once again represents a move in the right direction. Great ball flight, great looks and great feel.

FG Tour M3 irons gives you game improvement performance with better player looks, in my book. As I've mentioned before, I think this club will suit golfers from at least an 18-handicap all the way down to pro. These are forged babies for the player transitioning from a traditional game improvement design.

At £599 (4-PW, steel; £699 4-PW, graphite), the FG Tour M3 isn't cheap but I suppose it's about right in the current climate. I believe the M3 is worthy of serious consideration for golfers thinking of buying a new premium set of clubs for 2014. Wilson Staff are very much back in the spotlight.