Tyrrell Hatton talks exclusively to GolfMagic during the coronavirus lockdown... 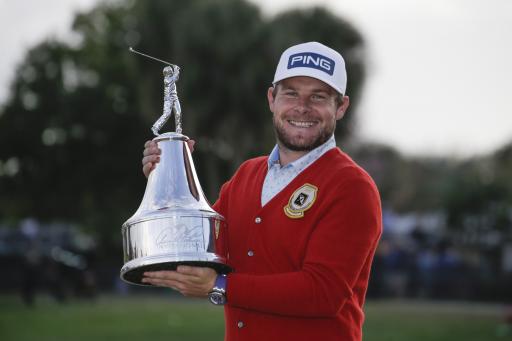 Tyrrell Hatton has told GolfMagic his maiden PGA Tour victory at the Arnold Palmer Invitational in March was somewhat of a "surprise" having only recently returned to action from injury.

Hatton prevailed by one stroke over Marc Leishman at Bay Hill in his last tournament before the coronavirus pandemic brought an instant halt to the PGA Tour schedule.

Speaking exclusively to GolfMagic this week, the World No.21 addressed his breakthrough PGA Tour win, his thoughts ahead of the Ryder Cup and a revised 'Fall' Masters, his favourite PING clubs in the bag, how he is keeping busy during lockdown, and whether or not he has forgiven his partner for slamming a toilet door shut in his backswing!

We are also giving away a brand new pair of adidas codechaos shoes as worn by Hatton - just head over to the GolfMagic Instagram page and follow the competition details...

Tyrrell - first things first, how does it feel to recently become a winner on the PGA Tour? Did you feel a win in the United States was only a matter of time following a number of close calls in recent years?

It was an amazing yet surreal feeling to win my first PGA Tour event at such an iconic venue. It's been a goal of mine to win on the PGA Tour, but to win so soon after wrist surgery was a bit of a surprise to me. I'm just very fortunate that it was my week!

How excited are you to hopefully play The Masters in November? Do you think Augusta will play any different to before?

I can't wait. I think a November Masters will be very similar to previous years in April, simply because they have the ability to set the course up exactly how they want it to play. I expect it to be as good as it always is... I'm very excited to play there in the Fall.

Padraig Harrington recently said he could consider 12 captain's picks for the Ryder Cup this year, or will maybe even change the qualification criteria due to the coronavirus pandemic. You're currently in the automatic spots for a place in the team - how do you feel about that?

I think qualifying for the European Ryder Cup team will depend entirely on how soon we get back to playing tournament golf again, and how fair the original process will be with fewer tournaments played. It's definitely a goal of mine to make the team again, but if it comes down to captain's picks then there is certainly no guarantees!

Which US player would you like to face in the Ryder Cup singles?

Well, I was against Patrick Reed in the singles last time in Paris and unfortunately lost 3&2. So if there is a Round 2 in the future, hopefully this time it would go my way!

How do you feel about potentially playing tournaments, and possibly the Ryder Cup, without any fans watching?

Obviously it would be quite different than what we are used to but until it's safe for everyone to be in large groups out on the course again, then I think that is the only way forward right now.

How are you finding this unwanted break in the schedule? How are you keeping busy during lockdown?

Even though the golf course and practice facilities have remained open where I am right now, I haven't been playing much golf at all. I've mainly been enjoying some time at home playing on the Xbox, and I've been trying to keep fit with daily FaceTime workout sessions with my fitness team.

What clubs have you got in the bag right now, and which one is your favourite?

I've got 11 PING clubs in the bag at the minute. I'd have to say my favourite club is the G410 7-wood or my putter, which is a PING Vault Oslo.

What's it been like to work with the guys at Modest Golf?

I've only been with Modest Golf for a year but I already love being part of their team. They do a great job for their players, but they also want to grow the game and I think that shows with all the positive work they're doing.

What is your favourite golf course in the world?

TPC Sawgrass, home of The Players. Although I will say they should dig up the 8th hole... a 230-yard par-3 has never been a good idea!

If you were not a Tour pro, what do you think you would have been?

Golf has always been a huge part of my life so if I didn’t make it as a Tour pro I’d like to think my journey in golf would not have ended there.

Have you forgiven your partner for slamming a toilet door shut in your backswing last season?

[laughs] Yes... although she will never live that down!

Finally Tyrrell, as a massive Liverpool fan, what are your current thoughts on waiting to be crowned Premier League champions this season?

Hopefully they can finish the season off. They have been brilliant so far this season so it would be nice to see them win the Premier League properly. Either way, they will be crowned champions.

GolfMagic is giving away a pair of new adidas codechaos shoes as worn by Tyrrell Hatton.