"I think I did what I needed to do. I'm quite a practical person, but I know I needed to be more than that when you're the Ryder Cup captain." 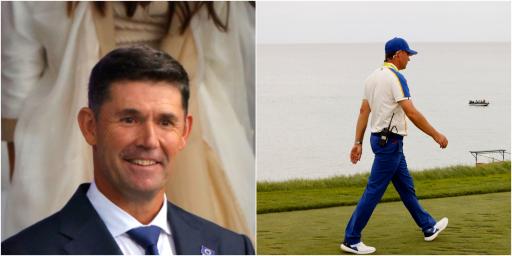 It's hardly surprising some members of the European Ryder Cup side have come to the defence of captain Padraig Harrington.

One of those names you'd expect to hear defending Harrington was Shane Lowry, who admitted he was "sad" for his friend and fellow countryman.

Similarly, Ian Poulter leapt to the defence of his team's leader, claiming it's not fair that he will be pilloried and hoped the comments wouldn't be too brutal.

In the immediate aftermath of Europe's biggest ever defeat in the modern era, there was hardly a negative word to say about Harrington, 50, who himself claimed he did not regret any decision he made.

"I think I did what I needed to do. I'm quite a practical person, but I know I needed to be more than that when you're the Ryder Cup captain," he told the world's media.

"I do think I managed to bring these guys together, and, okay, we didn't get the results we wanted, but I think we were a team, and that's the most important thing at the end of the day."

So was Harrington truly to blame? It's arguable both captains made incorrect decisions. After dismantling Rory McIlroy and Ian Poulter 5&3 on day one in the morning foursomes, Stricker split up Patrick Cantlay and Xander Schauffele. Cantlay halved his match in the afternoon while Schauffele claimed a point with Dustin Johnson. That decision worked out for Stricker while Harrington was unfortunate. Fine margins.

This was an American team on steroids and then some. There are some remarkable statistics that suggest Harrington and his side never really had any chance away from home.

Dustin Johnson became the fifth player ever to go 5-0-0. The six American rookies combined for an overall reord of 14-4-3. Of those rookies, Collin Morikawa, Patrick Cantlay and Scottie Scheffler went undefeated.

Could Harrington have done anything in response to this? Hardly. He was in charge of his sides pairings but he wasn't in charge of how the Americans were going to play.

Luck was also against Harrington. In reality, it hindered him that Bernd Wiesberger qualified for Team Europe at the BMW PGA Championship at Wentworth. Not that he didn't deserve to be there, but it meant Harrington was faced with picking Shane Lowry or Justin Rose.

Harrington placed faith in his European veterans. Just like captains have done before and will do after him, including the winning ones. It is not his fault Paul Casey, Lee Westwood, Rory McIlroy and Ian Poulter failed to show up.

Make no mistake, Harrington will privately shoulder the lion's share of the blame. But publicly he doesn't deserve to be judged too harshly. This was the greatest US Ryder Cup side in many, many decades.