Golf in the Dominican Republic 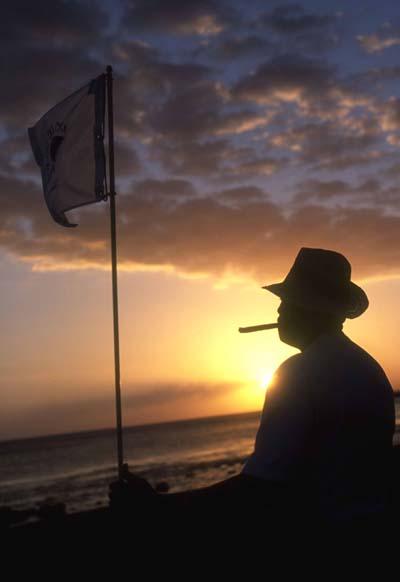 Long before the Dominican Republic became the world’s major producer of hand-crafted coronas and robustos cigars, the original Indian inhabitants known as Tainos, wrapped and smoked rudimentary versions of today’s Davidoff, La Aurora and the exquisite Opus X by Arturo Fuente, with its distinctive gold and red band.

But it's not just cigars classified as 'super-premium' that make this place famous. Already home to the infamous Teeth of the Dog, a Gary Player 18-holer, two Robert Trent Jones Senior tracks as well as creations by Nick Faldo and Jack Nicklaus, the Dominican Republic is a destination for the aficionado of top-notch cigars and challenging tropical golf.

“It must be one of the best 19th hole views in the world,” observed Olivier Brizon, director of golf, as we shared cold beers after our first round at Punta Cana Resort's La Cana course on the east coast. From the elegant clubhouse, the 18th fairway and green, skirt the coastline with breathtaking white sandy beach and sparkling turquoise waters of the Caribbean Sea beyond.

Just as Dominican cigars have different flavours, strengths and nuances, so too, the golf courses. Dominated as much by abstract expanses of sand as green fairways, La Cana has its own character. Innovative, beautiful and fun, this tropical gem designed by P.B Dye (son of Peter Dye), is a blend of long, rolling, inland holes and several spectacular holes that flank the ocean.

The tee shots are wide and inviting, but it’s the second shots and the delicate ones around the greens that provide the real challenge. Hole No.7 boasts a cluster of 21 pot bunkers that 'P.B.' jokingly refers to as ‘Hecklebirnie’ - a type of golfer’s purgatory according to Scottish lore.

The course’s signature hole is a spectacular par-3 14th that can be played from any of a series of tees dependent upon the golfer’s skills. Punta Cana Resort & Club also features Dye’s Hacienda course and Tom Fazio’s Corales course that culminates in a striking 18th hole with a dramatic carry over the rocky Bay of Corales.

Inland from Punta Cana, the island is a diverse landscape of rural villages and bustling communities, continually serving up slices of colourful Caribbean life. Near Higuey, we discovered a local cigar -makers - the Jovanny's Cigar Factory. Inside the weatherboard interior, the cigars didn’t have colourful bands or well-known names but they were a decent smoke costing only a few pesos each.

We stocked up on a small selection of robustos and hit the road through the sugarcane fields towards Casa de Campo, where a tempting trio of Peter Dye-designed courses awaited - the Teeth of the Dog, The Links and Dye Fore.

Early next morning, bags and carts were neatly lined up in rows outside the caddie master's office at teeth of the Dog. It was a hive of activity - caddies wearing gold, blue or white shirts to denote their experience busily filled water containers, cleaned clubs and kept an eye out for likely clients. A cluster of Americans emerged from the pro shop and headed for the practice putting green, newly-purchased cigars clenched between their teeth. There was a palpable buzz in the air.

Dye Senior is reputed to have claimed he only created eleven holes on the Teeth of the Dog - God created the seven skirting the Caribbean Sea! Even though the site was stunningly beautiful when he first saw it in 1969, it was covered with thick brush, stubby tropical trees and cacti. Dye and his construction crew oversaw a staff of 300 local Dominicans who would mould the course essentially by hand.