Home » Travel » Rest of the World

Marrakech has a new golfing gem - Assoufid is the name 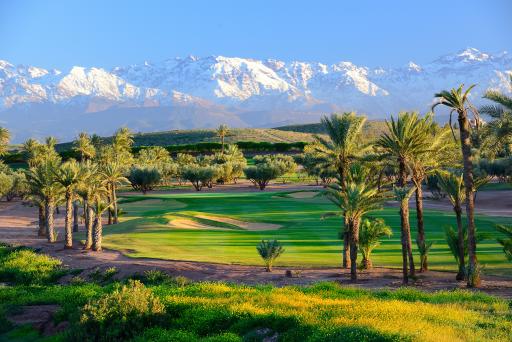 Emerald ribbons of perfection drape across the Moroccan desert like fairways of phosphoresence. From the chic clubhouse on a prominent knoll, the crumples of the Marrakech hinterland stretch away to the snowy Atlas mountains.

Cactus, olive and palm trees stud the terrain, brown and bare away from the course.

The Red City’s mystical medina seems a world apart yet it is only a 20-minute drive to the ancient world of sinuous souks and the intoxicating Djemaa El Fna square.

Marrakech is a tourists’ dream, a short flight from most European cities, yet alongside the snake charmers, the carpet sellers, the food and the history, Morocco’s third-largest city is growing fast as a golf destination.

And Assoufid is the new jewel in the desert.

Opened in 2014, Assoufid was laid out by first-time designer Niall Cameron, a Scot who played on the European Tour and was head pro at such venerable tracks as Turnberry and Royal St George’s.

The recent boom in golf development has seen Colin Montgomerie, Jack Nicklaus and Kyle Phillips craft courses in Marrakech, but Assoufid stands out by virtue of its setting.

Whereas much of the terrain outside the 11th century city is flat - requiring major earthworks to develop a golf course of note - Assoufid tracks the natural folds of the rolling scrub, the first sign of swell as the land rears up towards the mountains.

The two nines run in traditional loops from the clubhouse to form a 7,042-yard, par-72 golf course that meanders either side of a dry river bed, known locally as a shaaba.

The immaculately conditioned greens and fairways – Bermuda grass overseeded by cool weather rye grass in winter - stand out against the ochre earth like viridian vapor trails.

Although it takes a couple of holes to adjust to the “barren” look, the surrounding land has been kept bare for a reason.

“It is a desert style course with only 36 hectares of grass requiring irrigation and maintenance,” said Cameron. “To be ecologically friendly and sustainable was not only desirable but essential.

"During construction a minimum amount of earth was moved as the course was routed around hills and every effort was made to use the land as it lay after centuries of moulding by the environment and elements.”

The fairways appear narrower as a consequence, which adds to the allure. And although the adjacent scrub is playable, a wayward shot at Assoufid can take a violent ricochet off the hard pack, rather than settle in any deep stuff.

“It is my personal preference to allow golfers to hit a driver when they wish to,” added Cameron. “Therefore, on all par fours and par fives there is no limit to how far you can hit the ball straight.

“There may be bunkers on the sides of the fairways awaiting an errant shot but the course is essentially a second-shot course and it is here that you will have to answer the questions.”

Cameron has used the shaaba, sporadic bunkering, a variety of green designs, indigenous and imported trees and the natural undulations to frame a range of interesting and arresting holes.

The front-nine highlights include the par-four fifth which seems to send you deep into the desert, the dog-leg seventh with the perils of the shaaba down the left and the downhill par-three ninth guarded on the left by a steep bank and deep bunkers.

However, it is on the back nine that Assoufid’s true character comes to the fore. The 10th offers a risk-and-reward second over the shaaba to an isolated green before the back-to-back par fives of 13 and 14, with its split fairway and the choice of going left or right of the palm thicket.

The 15th is played back over the corner of the river bed, no mean feat to find safe ground from the back tees, before the challenge of Assoufid’s signature hole, the downhill par-three 17th from a lofty tee to a green on the far banks of the shaaba.

You may not realise it, but the routing of the two nines not only incorporates the best of the natural features but takes more ephemeral aesthetics into account.

“Small details are important and one such example was to ensure not to have the opening holes playing east or the closing holes playing west,” said Cameron. “It is a frustrating enough game without the rising and setting sun making it more difficult.”

Assoufid’s strengths lie in its skillful and sympathetic use of the natural undulations, its conditioning and attention to detail and the first-class service on offer.

Indeed, employing one of the knowledgeable native caddies will not only save you some effort and maybe some shots but might offer a glimpse into local life if you are willing to chat. English or French will work if your Arabic or Berber is not up to scratch.

“Our objective is to provide the finest golfing experience by delivering a beautifully maintained golf course and exceptional levels of service whilst protecting the integrity of the indigenous natural landscape,” said Guy Maxwell, director of golf at Assoufid.

The site, owned by a Kuwait real estate company, is to be developed further with a five-star hotel and residences and other world-class facilities, while the elegant yet understated clubhouse already offers exquisite dining through the food of French chef Damien Durand.

Marrakech is making waves in the world of golf. And Assoufid is a swell certainly worth riding.

The author stayed at the five-star Selman Marrakech, perfectly placed for both golf and city visits.