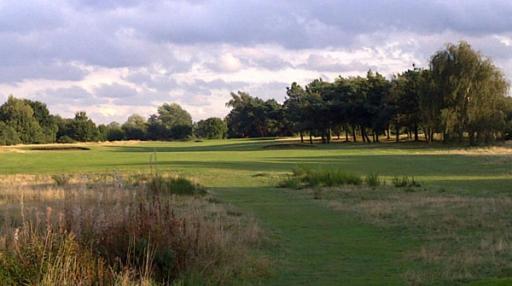 The sign at the entrance to Bungay and Waveney Valley Golf Club greeted me with a welcome ‘to the hidden jewel of Suffolk golf’.

It’s a bold statement, but as I discovered, bang on the money.

This place has got history – stretching back to the reign of Queen Victoria in 1889 – and is known as a hot-bed of wildlife judging by the catalogue of bird species identified on a noticeboard.

So while the A143 to Bungay may be a road less travelled by golfers seeking courses in the East region, it’s a journey well worth making.

Primarily a heathland course, designed originally by Scottish legend James Braid, its back nine borders Outney Common. To my eye there are few weak holes though the 18th - a 318-yard par-4 - proved a disappointing anti-climax compared to the rest.

Overall, though, it was a great place to play with a batch of great par-4s and a couple of fine par-3s.
I was struck by the atmosphere here, especially standing on the raised green at the par-4 second close to the par-3 12th with the 11th and ninth also nearby. Busy, it may be at times, but you never feel crowded. There’s just a sociable air to the place.

The course demands searching questions of your approach play. The greens are small and several are sunken, and out of side from the fairway, while complimented by others that are elevated.

Length off the tee only goes so far at Bungay – you need to have your short-iron play in good nick to flourish, with accuracy rewarded.

I’ve always been intrigued by courses which name their holes as well as number them. Some are obvious, like ‘The Valley’, which demands you to fizz a short iron over a gaping swathe of rough grass then upward to a parapet green. But my favourite is the 11th – “Ravine – a 426-yard blind par-4 requiring two great shots to find the sunken green.

Why the 16th is labelled ‘Race Course’ is still a mystery - though many towns in the 19th century were known to host horse-race meetings to satisfy the insatiable hunger for betting at the time. Or maybe it pays homage to the river Waveney which borders the course like a horseshoe.

There’s plenty of gorse here, but it’s far from overbearing alongside the pine and birch trees that flank many holes.

I was also smitten by 17 – “The Punch Bowl – the only par-5 where a tee shot to the left opens up the rest of the fairway which sweeps down to another sunken green.

Followers of European Tour golf will recognise the name of Bungay’s director of golf. Andrew Collison played the Tour in the 1990s having recorded three European Challenge Tour wins and has been a popular fixture for the last decade.

He says: “We are genuinely a friendly club with 600 playing members from a cross section of the community. The course presents a good test for all levels of golfer, including the low handicapper, particularly at the only par-5 which can be a card-wrecker.”

“There are at least five very strong par-4s but to get birdies you have to hit good iron shots and hole decent putts,” adds Andrew, who claims the par-3 15th is one of the most attractive, while the third is the toughest, demanding a drawn tee shot to find the fairway.

With membership fees set at £615 annually it’s an attractive proposition for those in picturesque, rural South Norfolk or North Suffolk and there’s great value to be had in the clubhouse, whether you just fancy a post-round pint of Adnams ale (£2.95, brewed at nearby Southwold) or steak and ale pie (£5.25).

If you’re already fed up with boggy winter fairways, Bungay’s sand-based course will oblige, whatever the weather. You’ll only have to pay £25 for 18 holes with a fish and chip supper thrown in for good measure as part of the club’s winter warmer package.

Have you had the pleasure of playing Bungay? Why not write your own review? Remember, Golfmagic is giving away a GolfBuddy Platinum AND a GolfBuddy Voice GPS device EVERY MONTH for the best submitted course reviews. Click here for more details.

Golf news
Are you entitled to relief if your ball is in a hole NOT CREATED by animals?
Golf news
WATCH: Would you peg it up with this WILD CHEETAH on the tee box?
Golf news
INSPIRATIONAL 103-year-old woman hits balls on driving range
Golf news
Bear runs at golfer then climbs tree at golf course in British Columbia
Golf news
Golf fans react as unlucky golfer ACCIDENTALLY hits car with his ball