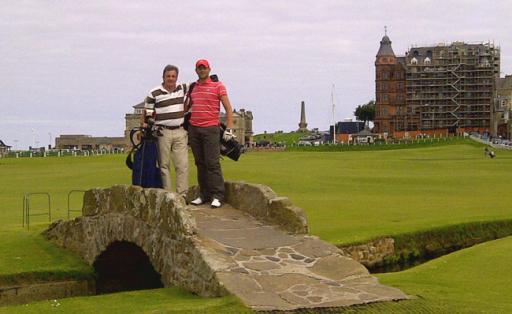 Tom Caplan is a keen golfer, a solicitor in London and son of dentist and former England rugby international David Caplan (two caps at full-back against Scotland and Ireland in 1978), who gave him the chance to fulfil both their dreams to play The Old Course at St Andrews, as a 30th birthday present.

Having successfully negotiated the ballot process to play the Old Course alongside two Finnish golfers, Tom describes the experience of stepping out on to the hallowed turf -  almost comparable to his father playing at both Murrayfield and Twickenham. He says it's not clear whom was more scared on the relevant occasion!

I've played golf for 20 years, much of it through the thicket at Luffenham Heath in Rutland. I try to keep the swing oiled and comfortable playing off my 15 handicap but it didn't really prepare me for the legs shaking and the sticky palms as I was invited to play away by the starter on the first tee.

I don't think I have ever experienced such nervous anticipation. The first hole is certainly not the most menacing but if you miss the gaping fairway, that's one severe slice or hook you've taken.

Clearly, many people are there to just to see the course and to watch. But to stand on the first tee - big dog in hand - with more than a hundred people watching, you really feel the pressure. Fortunately I made contact and my ball finished just short of the Swilcan Burn to set up a settling par.

History dictates it's the Home of Golf and there's no doubt it has been tamed by many others have had their game torn apart. The wonderful thing about golf is you can play a course that the pros play and understand the enormity of the gap between your skill and theirs.

To be honest I can't remember too much about my round - such was the haze of nostalgia I was wrapped in - but I kept it reasonably straight, though was often caught out by the length of putt I left myself on the huge double greens.

Though the first and last holes nearest the town and its historic setting are wonderful there aren't too many aesthetically pleasing ones. No lush green grass and manufactured hazards. But the walk itself is a stroll among history, especially following in the footsteps of legends crossing the Swilcan Bridge and what it taught me was that there's more than one way to play the game.

Double greens certainly introduce a new dimension to the short game and for some obscure reason at the 17th, the attraction of hitting an approach into the Road Hole bunker, just to see if I could escape in one shot, was almost overwhelming. Maybe my game would benefit more from trying to find a bunker on purpose. I failed miserably!

So how did my natural game, which relies on high trajectory shots, fair on the Old Course?

I had to adapt because high shots and wind don't mix. I tried to play low, punchy shots but the firm condition of the course with tight lies makes their execution something of a lottery. A members bounce is rarely in your favour. Don't you just love those love those 100-foot putts?

And with treacherous rough, you have to play sensibly and think your way around it. Thankfully I kept out of most bunkers, the gorse bushes and the deep stuff.

We decided against hiring caddies but I'm sure that for many visitors who prefer some wily Scottish banter and historical commentary with their yardages, they are good value.

I'd give the St Andrews a maximum five marks for enjoyment. I've enjoyed other courses more but coupled with the history, it's incomparable.

Hard to fault the condition (4) but I'm glad we did not play it at its windy worst. But it was still a test. In terms of its degree of difficulty (4) it's not the hardest I've played but if that wind from the North Sea kicked up, I'd prefer to be indoors.

Overall I truly enjoyed the course and the history that goes with it. I'm glad to have had the privilege of playing there but compared to North Berwick where we also played, the welcome we received was not quite as warm and relaxing considering the daunting pressure and what we were paying to play one of the world's most famous courses. Maybe hiring a caddie might have added to the St Andrews experience.

Any true golfer must play the Old Course but it's not cheap and, personally, I feel it needs a little more of a sympathetic approach around the first tee.

But to just walk - never mind play - that famous course was truly an honour.

FOOTNOTE: It is easier to obtain a tee time on the Old Course than many might think if you have a suitable handicap (24 for men and 36 for women). Price between April 16 and October 14 is £150.

*Single Golfers can approach the Starter on the day they wish to play and he will try to slot them in with groups going out that day.