After all that learning, Andy needed a relaxing round of golf at The Belfry... 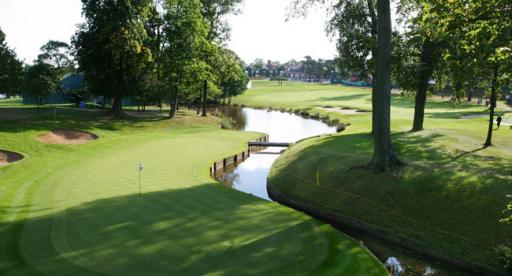 NEW: THE BELFRY - BACK WHERE IT BELONGS

Having visited The Belfry’s PGA National Academy to find out more about becoming a pro and chatting to some of the students currently trying to find their feet, Golfmagic’s Andy Roberts had the chance to play the four-time Ryder Cup Brabazon course. Here’s how he got on…

“Numbers are looking good,” said Gary Silcock, my host for the day, as we strolled up to the iconic 10th hole of The Brabazon.

Reasonably certain he wasn’t talking about my front nine, which while we’re on the subject resembled a number from the local Birmingham directory, I wanted to learn more.

“I want to learn more,” I said, drooling at the prospect of playing one of the most internationally-recognised holes in golf. His response was capsuled in a sentence.

Aside from recording a 15-over 87 score off the back tees in extremely damp conditions, despite my six handicap, Gary consoled me by advising that the course was ‘playing as tough as it ever has’. But all in all, I could not be more impressed with this brutal Warwickshire track.

Plenty can happen in 30 years having given the job of converting agricultural land into a golfing gem to twice Open runner-up Dave Thomas and my broadcasting hero Peter Alliss. The Brabazon’s meticulous design involves tight but majestic fairways, perilous bunkers, lakes and fast undulating greens. These iconic holes have challenged some of the game’s greatest players.

I might not have been able to emulate Seve’s tee shot to the heart of the par-4 tenth green or Christy O’Connor’s belligerent 2-iron into the 18th, yet to be walking in the footsteps of legends for the full 7,196 yards was a privilege.

The Brabazon is a thrilling test of parkland golf that is not only highlighted by the jaw-dropping 10th but the treacherously difficult par-4 18th. The hole demands a mammoth drive across the corner of the lake to set up a mid-iron into the three-tier, 70-yard green that sits tantalisingly beyond the lake and in front of the five-star hotel.

But for those yet to experience The Brabazon, this is no two-hole wonder. It starts with two relatively straightforward par-4s - I bogeyed both – before the 538-yard par-5 third showcases the first of 11 holes influenced by water.

If you’re long and brave enough you can go for the green in two. Unfortunately, I got my Cobra AMP stuck in my skirt on the downswing and was forced to lay up before misfiring a wedge into the rough en route to third consecutive bogey.

Instead of asking Gary for the local taxi firm, or copying Henrik Stenson by throwing my wedge over my head into the H20, I gave myself a good talking to as I walked onto the par-4 fourth.