Tunisia is one of the world's most up-and-coming golfing destinations. We have made a list of five of the best golf resorts in the country. 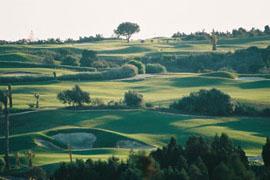 Tunisia continues to rise in popularity as a destination for golf holidays and retreats. The weather is reliable, the price is reasonable, and the locals are friendly. And with ten more courses planned over the next ten years, including one to be designed by Jack Nicklaus, golf is definitely on the up on the North African coastline. And for those not quite so golf-minded, there are plenty of other attractions, such as Sahara Desert excursions, scuba diving, spas, and Roman ruins to keep you occupied. Here are five golf resorts worth considering if you are planning a golf getaway to Tunisia.

Situated just 25 minutes from Tunis-Carthage International Airport, the Robert Trent Jones II-designed course at the Residence Golf Club was opened in 2008 and is one of the jewells in Tunisia's golfing crown. The 7,054-yard links course snakes its way between the sea and the adjacent salt flats, providing stunning views of the surrounding scenery. There are also excellent spa facilities at the adjacent, indulgently luxurious Residence Tunis hotel. The Residence is an hour away from Hammamet, and also just outside the ancient city of Carthage, so there is plenty to see and explore off the golf course for the history-lovers among you. Carthage is also home to the oldest golf course in Africa, the Carthage Golf Club (built in 1927). The Carthage offers a completely different test to the modern Residence course, and measures just 4,864 yards.

Hammamet is Tunisia's most popular destination for golfers, and it's easy to see why. There are three golf courses in the region: the course at the Yasmine Golf Club and the two 18-hole courses at the Citrus Golf Club - La Forêt and Les Oliviers. The Yasmine course features undulating fairways, creeks, two lakes and some heavily sloped greens to ensure a stern test for any golfer. The two courses at the citrus cater for all abilities, with the Les Oliviers course more suited to the higher handicappers owing to its wide fairways and large greens, while the narrow fairways of La Forêt (Hammamet's most challenging course) are punishing for wayward players off the tee, and many of the greens are protected by bunkers. The area is the country's most popular beach resort, and boasts a multitude of four- and five-star hotels, such as the Hotel Riu Palace Hammamet Marhaba. However, it also requires the longest airport transfer at 60-90 minutes.

This resort is perhaps the most user-friendly in the country - everything is within walking distance. The Kantaoui Golf Club was the host of the now defunct Tunisia Open on the European Tour and has also hosted many European Senior Tour events. The club has two courses - the Sea Course and the Panorama Course, each prioviding different challenges, although the Panorama is the more difficult of the two. There is a wide array of flora and fauna to see too, and many of the local hotels offer good discount deals on green fees. The resort also has a great beach which can provide a welcome distraction. The Hotel Riu Imperial Marhaba and the El Mouradi Port El Kantaoui Hotel both receive good reviews.

Monastir is located just next to Port El Kantaoui, roughly half an hour's drive away, so it is very easy to try all the courses of both resorts on the same trip. The two courses are the Palm Links Golf Club and the Flamingo Golf Club. Expect to see some flamingos wandering the fairways of the latter, which feautures seven holes that trace the cliff edge. The Palm Links is perfect for those looking to combine golf with a relaxing spa treatment, and is particularly renowned for its thalassotherapy. The marina also has a lot to offer in terms of watersports, such as jet-skiing and scuba-diving. The Royal Thalassa Monastir Hotel is always popular with golfers.

The city and oasis of Tozeur is located in the south-west of Tunisia and was the filming location for Star Wars Episode I: The Phantom Menace and The English Patient. It is the perfect starting point for excursions into the Sahara Desert. The focal point for golfers is the Tozeur Oasis Golf Club, which uses specially engineered grasses to combat the high temperatures and arid conditions, allowing year-round play and making it a popular winter destination. The course is just on the edge of the Shara, ehich ensures it is a unique golfing challenge. July and August are best avoided on account of the scorching heat.