Brooks Koepka player profile: from the car crash that started him as a golfer to double US Open champion

Brooks Koepka background: we chart the ascent of the back-to-back US Open champion. 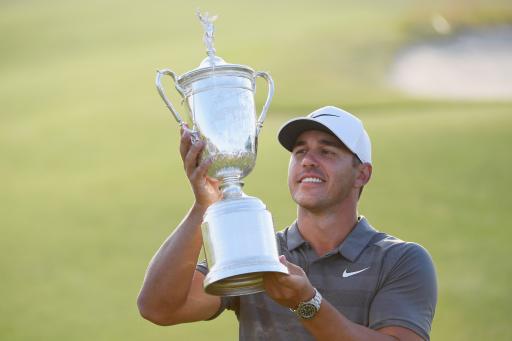 - Raised in Lake Worth.

- Aged 10 he fractured his nose and sinus cavity in a car crash and could not play contact sports. Spends his time at Okeeheelee Golf Course.

- Aged 13, he ends his dad’s five-year club championship streak at Sherbrooke Golf, beating him in the final.

- Plays College Golf at Florida State, where he won three events and was a three-time all American.

- Koepka’s mother, Denise Jakows, beat cancer while he was in college, which had an impact on the youngster. “It made me figure out that life can go pretty quickly, so enjoy it,” he says. “Make people laugh, make the best of things. Maybe not take things as seriously.”

- Turns pro in the summer of 2012 and gets on the Challenge Tour in Europe.

- On playing in Europe: “I think it helped me grow up a little bit and really figure out that, ‘Hey, play golf, get it done, and then you can really take this somewhere.’ I built a lot of confidence off that.”

- Teams up with Claude Harmon III, who is still his coach today.

- Gets caddie Ricky Elliott on the bag, a former mini-tour player and coach from Northern Ireland.

- A month later he adds another W at the Fred Olsen Challenge de Espana, setting a tournament record (-24) winning by 10 strokes.

- Gets a third win of the year at the Scottish Hydro Challenge, earning a European Tour card for the rest of 2013 and 2014.

- Debuts on the PGA Tour in 2014 at the Frys.com Open and leads going into Sunday. Ends on T3.

- On the European Tour in 2014, Koepka wins the Turkish Airlines Open, finishes third at the Dubai Desert Classic and European Masters, and ninth at the Dunhill Links.

A big W in Turkey - Brooks has the taste for it now...

- Ranked ninth in the European Tour’s Race to Dubai season, winning the Sir Henry Cotton Rookie of the Year award.

Rookie of the Year. Made on the European Tour...

- In February 2015, he wins for the first time in the US at the Waste Management Phoenix Open.

In amongst it in the US now.

- Moves up to 19th in the world rankings.

- Ties for sixth at the 2015 WGC-Bridgestone Invitational.

- Gives up his membership to the European Tour in 2015.

- Has seven top-10s, including two runner-ups at the AT&T Byron Nelson and St Jude Classic, in his 2015 season on the PGA Tour.

- Teams up with his brother Chase - who plays on Europe’s Challenge Tour - to come T5 in the 2017 Zurich Classic.

Into that pantheon of major champions

- Lands his first major at the 2017 US Open at Erin Hills, Wisconsin. Ties for lowest US Open score on -16.

- Plays in a winning Presidents Cup team at the end of the year.

A troublesome wrist halts progress in 2018.

- Re-injures it at the Players but continues playing, coming T11 - his first top 20 of the year.

A runner-up shows the boy still got it.

- Comes runner-up at the Fort Worth Invitational in May.

BOOM - back to back.

- Goes back-to-back at the US Open, winning at Shinnecock Hills.

- Becomes the first player since Curtis Strange to defend the US Open.