Bryson DeChambeau trounces the field to win the US Open

DeChambeau wins his maiden major title with a demolition display at Winged Foot... 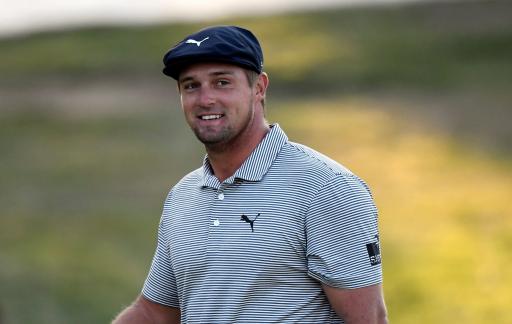 Bryson DeChambeau has won his first major title after trouncing the field at the US Open at Winged Foot.

Starting the final day two strokes behind 54-hole leader Matthew Wolff, the man nickname the 'Mad Scientist' carded a superb final-round 67 to finish on 6-under par and six shots ahead of his compatriot Wolff.

DeChambeau was the only player in the final round to break par.

The American's six-stroke winning margin is the biggest at the US Open since Martin Kaymer's eight-shot win at Pinehurst in 2014.

Despite smashing drives over 350 yards for much of the week, DeChambeau only hit 23 fairways at Winged Foot and that is the fewest ever found by a US Open champion.

After quite the transformation this season, DeChambeau now stands a beefy 240 pounds after a pretty wild diet (apparently he drinks seven protein shakes a day) and training regimen.

As a result of piling on the pounds and building muscle, DeChambeau now has an impressive clubhead speed in the region of 140mph and a ball speed notching 200mph - something the professional game has never seen before.

DeChambeau, who turned 27 years of age earlier in the week, has now won seven times on the PGA Tour.

Learn more about the evolution of DeChambeau in our video below...

Wolff was bidding to become the first player in 107 years to win on their US Open debut, as well as become the youngest major winner since Tiger Woods won the 1997 Masters.

But despite keeping tabs on DeChambeau on the inward nine, Wolff could not live with his compatriot on the back nine and ended up slumping to a disappointing 75 to finish on level par.

Louis Oosthuizen birdied the final hole to finish third on 2-over par, with Harris English in fourth on 3-over par and Xander Schauffele in fifth on 4-over par.

World No.1 and FedEx Cup champion Dustin Johnson never really fired for much of the week but still finished in a tie for sixth on 5-over par with Will Zalatoris.

Lee Westwood was a further stroke back on 7-over par with Adam Long, Viktor Hovland and Patrick Reed, who had led the tournament after 36 holes.