Wolff opens up two-stroke lead with 18 holes to go at the US Open... 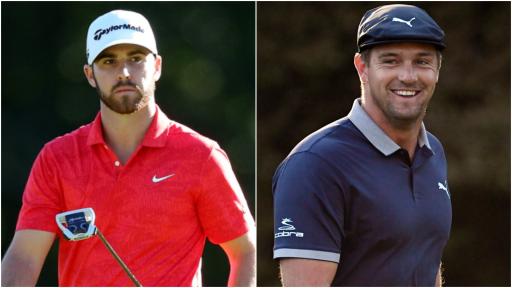 Matthew Wolff may have found just two fairways on day three of the US Open but it mattered little as the American fired a stunning 65 to open up a two-stroke lead heading into the final round.

Wolff, making his US Open debut at Winged Foot, rolled in six birdies during his round to progress to 5-under par for the tournament and a two-stroke lead over compatriot Bryson DeChambeau, who carded a 70.

Despite an errant driver for much of the day, Wolff praised his work on the greens.

"I think my putting was by far the best it's felt in the last two or three months," said Wolff, who needed just 10 putts on the opening nine.

"I feel like I'm really hitting the ball well. My irons were really good, and even though I only hit two fairways, my driver was -- it was just barely off, but that's the US Open.

This is @matthew_wolff5's first #USOpen appearance, but you wouldn't know it when you see how he earned the @Lexus Top Performance of the Day. pic.twitter.com/UoKWqkpPDR

"I feel like even though I missed the fairway, there was a lot of times I was in that graduated rough that's a little shorter, and I feel like yesterday the difference was I was in the really long stuff.

"I felt really good with all parts of my game, and I'm just excited to be where I'm at and look forward to tomorrow."

Should Wolff go on to win the US Open on Sunday, it will be 107 years to the day since 20-year-old amateur Francis Ouimet won the US Open in his first attempt. Incredibly, that US Open was also pushed back from June to September.

Wolff, 21, would also become the youngest player to win a major since Tiger Woods won the 1997 Masters at the same age.

Former Open champion Louis Oosthuizen is the only other player under par for the tournament on 1-under.

Rory McIlroy carded a solid 68 to move to 1-over par to give him an outside chance of a second US Open title and first major victory since 2014.

"The key for me was just to play the first five holes well," said McIlroy.

"I saw from a few of the guys early on those holes were playing really tough," said McIlroy, after a round containing three birdies and one bogey.

"I knew that middle section of the round you could maybe make a couple of birdies and then you sort of have to hang on coming in.

"I executed the game plan really well, knocked a couple in when I could. It was a really good round of golf."

To give you some idea how tough conditions currently are at Winged Foot, just seven players broke par on Saturday.

Spare a thought for Danny Lee, who six-putted from four feet for a quintuple-bogey nine, shortly before he ending up withdrawing from the tournament through a wrist injury...

The Danny Lee tapes have been released!!

This is how a four-footer for par turns into a quintuple-bogey 9 followed by a WD with a wrist injury pic.twitter.com/OCvcqpKod4