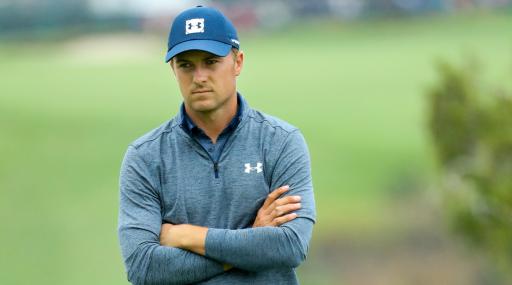 Jordan Spieth has taken full responsibility for striking a hidden bunker rake on one of his shots on day two of the US Open at Pebble Beach.

Spieth, who started the second round on the 10th hole, carded five birdies in his first nine holes, along with two bogeys and two pars, leaving him three under for the day at the turn.

After parring the first hole on the back nine, Spieth sent his tee shot on the second (his 11th hole) into the fairway bunker. He had a fairly decent lie but was 205 yards from the hole.

Commentators questioned whether Spieth could make it from there, but the American took the shot on. It wasn't the best of contacts, but it looked as though the ball had enough speed to get out of the long rough just over the bunker, that was until it struck a rake that was hiding in the thick stuff.

“The ball was above my feet in almost a little downslope, and I was trying to hit a 6-iron 200 yards,” said Spieth, who went on to card a 2-under 69 on Friday to lie 1-under par and eight strokes off the halfway pace set by compatriot Gary Woodland.

“So in the first place it was a really, really tough shot. But I had a clean lie. Thought I could clear the lip. And when I hit it, all I heard was like the rake. And I guess it slammed into the rake and came back and kind of buried down into the tall grass.

“I just got to look at all options ahead of me. And if there’s rakes in front of the bunker, typically we pull them out. But when I was in it, I couldn’t see it. So it was kind of a weird set of events. Honestly, the only upsetting part was where the ball went after that, because it’s on me to hit the rake. Sometimes it’d hit the rake and pop up and be on the fairway, right? But it ended up in a pretty bad spot.”

WATCH: SPIETH ROASTS CADDIE AFTER ERRANT SHOT AT US OPEN