Brooks Koepka says he's "not a fan" of the US Open driving range!

Brooks Koepka criticises the driving range setup at Pebble Beach ahead of the weekend's US Open action. 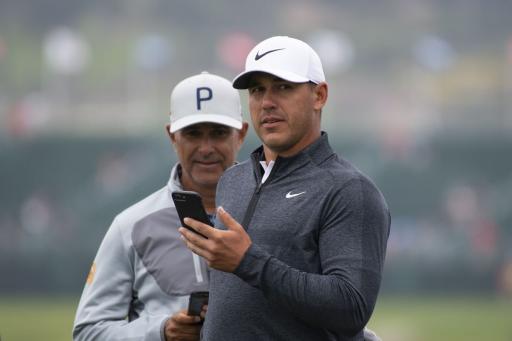 Brooks Koepka remains in contention for an historic US Open threepeat this weekend, a win that would result in his fifth major title in his last nine major starts. Just don't expect to see the World No.1 spending a great deal of time on the practice range, if at all, before he tees off this weekend.

Koepka posted his second consecutive round of 69 to lie at 4-under par and five strokes adrift of compatriot Gary Woodland.

But the big-hitting American, who is not afraid to speak his mind these days, told the media after his second round just how difficult he is finding it to practice before hitting the links.

In the eyes of Koepka, the grass is completely different on the practice range than it is on the course itself.

“This range doesn’t quite help," said Koepka. "[The wind is] going into and off the left. It’s in a direction I hate. The turf on the range is a little firmer, a little tighter than it is on the golf course.”

Nevertheless, despite admitting to being out of form at the start of the week, Koepka has told how he has found something out on the course on Thursday and Friday.

“It’s been easier to find my game actually on the golf course," said the four-time major champion.

"I feel like I can really be down on the ball, come in a little bit steeper than it is the range. The range is—I don’t know what it is. So I’m not going to hit balls today."