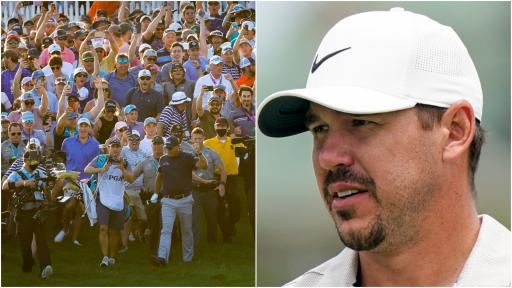 It was like a scene from out of East Lake when Tiger Woods strolled to glory at the 2018 Tour Championship, as Phil Mickelson's legion of fans stormed the 18th fairway to march with their man to a record-breaking victory at the US PGA Championship.

Only joint runner-up Brooks Koepka, who has been nursing a troublesome knee injury for much of the season, was left irate by the spectacle that unfolded as he trudged down the final hole alongside his playing partner Mickelson.

A great moment for Phil Mickelson, the fans and live sport. pic.twitter.com/1ge3t2o7RD

This is definitely one of the craziest things I’ve seen in person for work. @PGAChampionship fans rushing the course after Phil Mickelson’s shot pic.twitter.com/abHWwoJ1bz

"Yeah it would have been cool if I didn't have a knee injury and got dinged a few times in the knee in that crowd because no one really gave a sh**, personally,” said Koepka, who finished two shots shy of Mickelson in his bid to win a third US PGA title in the past four years.

"But if I was fine, yeah, it would have been cool. Yeah, it's cool for Phil, but getting dinged a few times isn't exactly my idea of fun.

"I was trying to protect my knee. I don't think anybody really understands until you're coming out of surgery how—even when I was doing rehab and there's five people kind of standing by your knee, you get a little skittish."

Kopeka also explained how his caddie Ricky Elliott got "drilled in the face" as he tried to walk through the crowd.

That then caused his golf bag to strike Koepka's knee as Elliott had to stop abruptly due to the movement of a number of fans.

"It feels sh** right now," Koepka said of his knee in his post-tournament interview.

As for his own final-round performance, Koepka was fairly miffed, but hardly surprising given he played the four par-5 holes on Sunday in a dismal 3-over par.

He was also left to rue a cold putter and a number of costly short missed putts.

"Just how bad I putted the last two days," said Koepka when asked for his thoughts about where it went wrong on the weekend.

"Three days, actually. It felt like tap-ins I was missing. [I] never felt comfortable, and you're not going to win if you do that.

"Phil played great. That whole stretch when we turned after 4 and 5 and played those holes, it's into [the wind] off the left for me and that's quite difficult for a right-handed player, and it suited Phil right down to the ground.

"I thought he played that entire stretch from about 6 to 13 so well."

Koepka, despite being left frustrated by his performance on the greens, was still pleased to see Mickelson enter the record books as the oldest major champion in history at the age of 50.

"I'm happy for him, [his wife] Amy and [brother] Tim," said Koepka. "It's pretty cool to see, but a bit disappointed in myself."

NEXT PAGE: HOW MUCH THEY WON AT THE US PGA