Brooks Koepka leads US PGA: "One of the best rounds I've played" 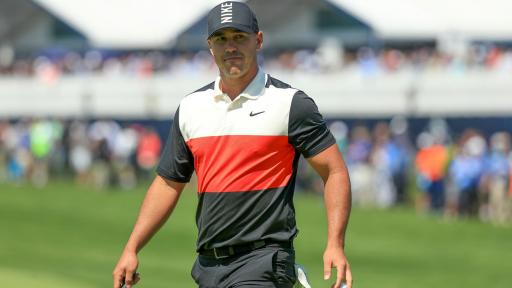 Brooks Koepka admitted to playing one of the greatest rounds of his life after scorching Bethpage Black in a course-record 63 to lead the opening day's play by one stroke over Danny Lee.

Koepka is bidding to become the first player to defend the US PGA since Tiger Woods in 2007.

Should the 29-year-old maintain his pace and go on to lift the Wanamaker Trophy again this Sunday, he would have incredibly won four of his last eight major starts.

Koepka's 7-under 63 is a course record at Bethpage Black and it means he is the first player to post 63 at a major in consecutive years.

''That was one of the best rounds I've played probably as a professional,'' said Koepka. ''This golf course is brutal.''

But there was still room for improvement according to the big-hitting American, who failed to birdie either of the par-5s.

"I didn't take care of the two par-5s, didn't birdie any of them," he said. "That was disappointing, because I felt like, you know, those are holes you should be able to birdie."

Tiger Woods was playing alongside Koepka but stumbled to a 2-over 72 to lie nine strokes off the pace in his first competitive start since winning The Masters last month.

But Woods revealed after the round that he had been suffering with illness.

England's Tommy Fleetwood got off to a solid start with a 3-under 67, while a star-studded group of players lie at 1-under including  Dustin Johnson, Jason Day, Rickie Fowler, Jordan Spieth and Phil Mickelson.

Rory McIlroy carded a 72 to lie nine back with Woods after day one.