WATCH: Fake Ian Poulter vs Fake Tiger Woods at the US PGA...

Hilarious impressionist Conor Moore is back with his latest video pitting Woods and Poults together... 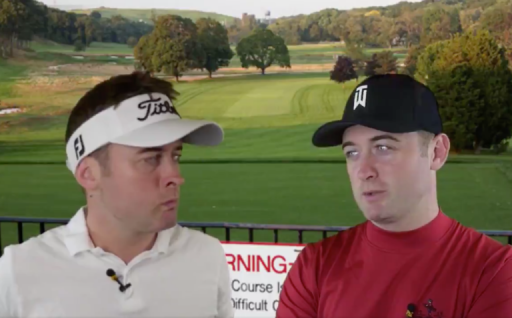 It's no secret Tiger Woods dislikes Ian Poulter. How do we know? Well, his former coach Hank Haney revealed all in his book The Big Miss, which you can see an extract of at the bottom of this article.

Poulter once told the media back in the day that he was the only player who would ever be able to realistically challenge Woods for titles. As things stand, the Englishman still trails the American by 15 major titles.

Impressionist Conor Moore thought he would pit the two players together ahead of this week's US PGA Championship at Bethpage Black to get them talking again during a joint interview. As expected, Fake Poulter was in typically confident mood, and Woods got annoyed that he stole his famous catchphrase "it was really, really tough out there."

The conditions are really, really tough out there at Bethpage Black.

On the heels of their Masters Saturday pairing, @TigerWoods and @IanJamesPoulter are back in action at the #PGAChamp via our @ConorSketches. pic.twitter.com/lk05AQvPcG

Oh, and here's that extract we were on about from 'The Big Miss' that reveals the strained relationship between Woods and Poults, for one reason or another...