Koepka becomes first player to go wire-to-wire at US PGA since Hal Sutton in 1983. 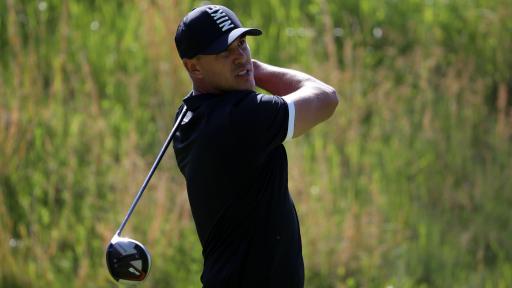 Brooks Koepka has become the first player since Tiger Woods in 2007 to defend the US PGA Championship following a two-stroke victory over Dustin Johnson at Bethpage Black - a win that moves him back to World No.1.

Koepka told the world he was the man to beat at this week's US PGA Championship, and he duly lived up to his word yet again with a fourth major victory in his last eight major starts.

But the big-hitting American certainly didn't make this one look easy on Sunday, especially with a fast-finishing Johnson in his rear view mirror.

Despite a healthy seven-stroke lead entering the final round, Koepka stumbled home and narrowly led close friend Johnson by just the one shot by the time he reached the 14th following four consecutive bogeys from the 11th.

But two bogeys at 16 and 17 from Johnson - two groups ahead - turned off any panic alarms for Koepka, who despite three-putting for bogey at 17, would go on to par the last for a round of 4-over 74 and two-stroke victory over Johnson, who posted a valiant 1-under 69.

Koepka becomes the first player since Hal Sutton in 1983 to go wire-to-wire at the US PGA Championship.

He also becomes the first player to win his first four majors in two years or less.

Koepka now has four majors to his name, which is two more than regular PGA Tour events (2015 Phoenix Open and 2018 CJ Cup).

For Johnson, it marks back-to-back runner-up finishes in the majors this season following a tie for second with Koepka behind Tiger Woods at The Masters.

England's Matt Wallace earned his best finish at a major with a tie for third on 2-under par alongside a resurgent Jordan Spieth and Patrick Cantlay.

Rory McIlroy closed with a solid 69 to back himself into the top 10 on 1-over par.