Koepka was in no mood for good luck kisses before his final round at the US PGA... 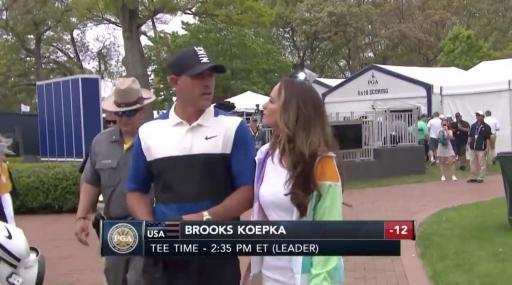 Brooks Koepka was in no mood for a good luck kiss from his girlfriend and actress, model Jena Sims prior to setting out for his final round of the US PGA Championship.

Watch Koepka swerve a kiss in the video below. It's AWKWARD, to say the least...

Brooks Koepka Denies Girlfriend Jenna Sims a Kiss, not once, but twice pic.twitter.com/OrvRkd50qE

Despite owning a commanding seven-stroke lead going into the final day, Koepka stumbled to a 4-over 74 but held on for a two-stroke triumph over his good friend Dustin Johnson on 8-under par.

It marks a fourth major title for Koepka in the last two years, and he now becomes the 11th player to win four majors by his 30th birthday, which falls in May 2020.

Koepka also becomes the fourth wire-to-wire winner of the US PGA Championship and the first to complete that feat since Hal Sutton in 1983.

He also becomes the first player to defend the US PGA since Tiger Woods in 2007.

Koepka also moves back to World No.1 with Johnson back in second.