Phil Mickelson reveals FASTING is the key behind his US PGA success!

Mickelson was also spotted chewing furiously on CBD gum at the US PGA Championship... 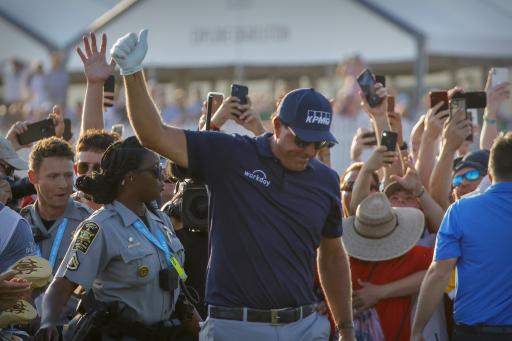 Phil Mickelson's hunger to win majors again was there for all to see at Kiawah Island on Sunday as the 50-year-old ran out a convincing winner of the US PGA Championship and enter his place in the record books.

Mickelson, who becomes the oldest major winner of all time, clinched a two-shot victory over Brooks Koepka and Louis Oosthuizen to capture his sixth career major title and second career win at the US PGA Championship.

So what's the key ingredient for success then, Phil?

Well apparently, it's all to do with fasting.

"I fast 36 hours every week, so I give up all food for a day and a half and let my body kind of reset," said Mickelson.

Would you do this to win a major? pic.twitter.com/OgizfX3KJa

Mickelson was also seen chewing furiously on CBD gum at the US PGA Championship, something that Tiger Woods has also done in past tournaments.

Lefty stated he chews CBD gum in order to "boost cognitive function" and that "the chewing aspect stimulates the frontal cortex."

Imagine 20 years ago someone told you skinny Phil Mickelson would be on the last hole of a major with a 2 shot lead while wearing sunglasses and chewing gum.

Phil Mickelson winning the PGA Championship chewing gum and wearing shades is the vibe I'm going for at 50.

Phil Mickelson wins this, he should be the face of a gum brand. Been chewing all day. Not sure if it’s the same piece or if he replenishes every couple of holes. He’s gonna get TMJ if not careful.

Woods, who was seen chewing CBD gum en route to Masters victory in 2019, said: "I’m chomping on this gum because I usually get hungry, I keep eating so much, and it curbs my appetite a little bit, which is nice.

"Most of the time, most of the issues I have at tournaments, I lose so much weight, as you all know."