An incredible video has been released of an interview with Brooks Koepka, who is unable to talk when Bryson DeChambeau walks behind him chatting. 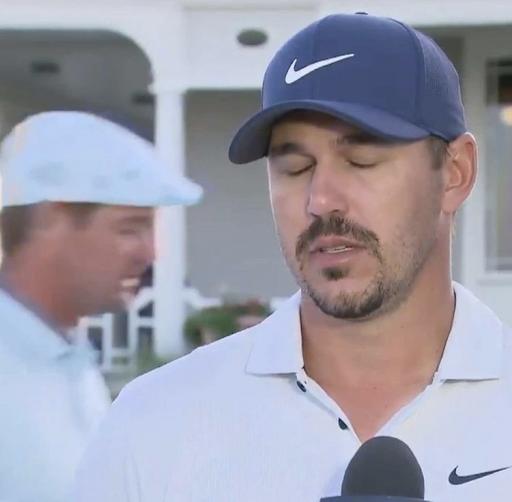 A fascinating and controversial video has been released of Brooks Koepka rolling his eyes and looking frustrated when Bryson DeChambeau walks behind him during an interview.

Koepka was being interviewed by Golf Channel reporter Todd Lewis and he asked Koepka what he was able to do well during his second round at the PGA Championship.

The World No. 7 began to answer the question and remark on how tough the greens were before DeChambeau walked behind him chatting to someone.

During the interview, Koepka said: "I felt it difficult to read sometimes."

He then stopped after being thrown off course by DeChambeau who was walking in his spikes to the side of him.

While it's difficult to hear exactly what DeChambeau muttered under his breath, one tweet believes he said: "Just gotta start it on the right line."

DeChambeau has since responded to the video with a post on Golfers Doing Things on Instagram with: "You know you can fix spike marks now."

Sports impressionist Conor Moore, who goes by Conor Sketches on Instagram, has published his own take on the interview.

The pair, who have five major championships between them, have not enjoyed a harmonious past and it is fair to say they don't exactly share a strong friendship.

"Anyone catch what Bryson said? Lol," one fan said.

"I loved Brooks until I saw how bother he was by Bryson? Be an adult, dude," one fan commented.

"A grown man shouldn’t make the same facial expressions as my six-year-old daughter," another fan commented.

"This is awesome hahaha best interview I’ve ever seen. I guess there’s bad blood between Koepka and Bryson," another fan commented.

"Love it but hate it for the Ryder Cup team dynamic," one fan said.

In August 2019, Koepka was one of many to make comments regarding DeChambeau's slow play at the Northern Trust, comments that the 2020 US Open champion took offence to.

Then in January 2020, DeChambeau was going through hard gym work and said that Koepka 'had no abs'. The four-time major champion fired back with a tweet and a photo of his four major trophies, with the caption "You were right. I am 2 short of a 6 pack!"

In November 2020, Koepka said he didn't need anyone to make him go to the gym, after being asked if DeChambeau's relentless gym work had made him question his own work ethic.

What happened at Kiawah Island is just another episode of the saga between the American pair, but this may be the most obvious sign of a feud that we have seen between them.

RELATED: BROOKS KOEPKA FUMING OVER PHIL MICKELSON'S SEA OF FANS ON 18 AT US PGA

The 31-year-old finished in a tie for second behind Phil Mickelson at the PGA Championship. On the final hole, fans swarmed down the fairway behind Koepka and Mickelson to see the now six-time major champion make history.

The eight-time PGA Tour winner took issue with such a mass presence of fans, explaining that his caddie got "drilled in the face" and he was concerned as he was still nursing a knee injury.

NEXT PAGE: PHIL MICKELSON CRACKED TWO CLUBS BEFORE THE FINAL ROUND OF THE US PGA!