Black Diamond Ranch review: the five holes that loop around a quarry make this one of Florida's best. 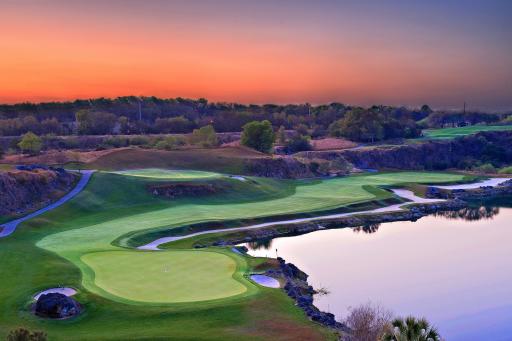 This Tom Fazio design is tucked away in Lecanto, Florida, on a vast expanse of land. The key weapon in its arsenal is a quarry, which lends its name to one of the two 18-hole layouts on the land.

Opened in 1987, it’s some 80 miles from Tampa or Orlando – but it’s well worth the trip. Often ranked as one of the best in the Sunshine State, you will not be forgetting your round on the Quarry course in a hurry.

Great golf courses need great land, and they got it in spades on this site. The first 12 holes are spectacular, with serene scenary. On these holes you will get a feel for the greens which are lightening (the fastest we’ve ever played on), generally large and with subtle undulations.

The fairways are pretty wide allowing you to open your shoulders, and if you’re knocking it well you can rack up a decent score. Then you get to the headliner.

Holes 13 through 17 go round a vast quarry, and it’s unlike anything we’ve seen before. The views are paralysing, with cascading descents into the bowl freezing us stiff as we looked on in disbelief.

The holes work their way around the spectacle, with two par threes, two par fours and a par five.

The elevated 13th tee is some 75 feet above the quarry floor. The question posed is can you hit the green some 183 yards away?

The next hole will test your bravery, with a risk-and-reward tee shot on this par five over the edge of the quarry. The dogleg left hole can be attacked by taking a dangerous line as close to the green as you can muster, but pull your shot or don’t strike it well and you could be pulling a ball out of the bag.

The 15th is an outrageous hole, which ranks with some of the best we’ve played. Again, the tee shot comes from a significantly elevated position, with water on the left hand-side of the hole and large bunkers all the way to the green. To reach the putting surface, players will need to hit over the bunker and perhaps a bit of water depending on pin position. The vistas as supreme throughout.

The 16th is difficult, with a tight tee shot testing your stamina. Water awaits on the left, and golfers will likely pull for a long iron on their approach. Par is a good score.

And then you come to the 218-yard par-three 17th, which forces players to carry all the way to the green. If you’re short, the ball will roll back to the bottom of a steep hill, leaving a nervy chip back up.

The finishing hole is a narrow par-five, doglegging to the left with deep bunkers on both sides, and a sand trap in the middle.

Without the holes around the quarry this would be an excellent track, but the addition of the feature takes this into a “category 1” course.

World class views and clever hole designs offer up a thrilling day on the course. The greens are insanely quick, while the overall upkeep of the course is high.

A memorable design, worth travelling far and wide to sample.

Head to the Black Diamond Ranch website for more.