The bunker, on the fourth hole of the Pulpit course, has a back wall that is about twelve feet high. 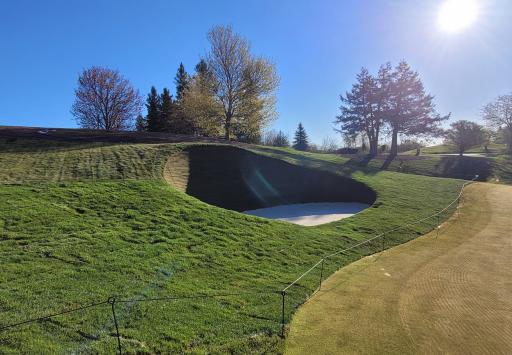 One of the world’s tallest revetted bunker walls has risen up at the Pulpit Club, the newly-renamed Devil’s Pulpit course, originally built in 1990 by architects Dr Michael Hurdzan and Dana Fry. And it has been made possible by the use of the synthetic revetting material EcoBunker.

The bunker, on the fourth hole of the Pulpit course, has a back wall that is about twelve feet high. It was previously supported using railway sleepers (railroad ties), but these had decayed over the course’s thirty year history, and needed replacement.

“I had seen the EcoBunker product at the Golf Industry Show, and it occurred to me it could be the right solution for the bunker on the fourth,” says course superintendent Rob Wright. “I bought a full container of EcoBunker, about twenty skids (pallets). This one bunker took about nine skids, and we will do two or three bunkers on the Paintbrush course this summer with the rest of it. The new wall looks great – it was previously at about a 35-40 degree slope, and now it is up to 65 degrees, so it looks much more like our other revetted bunkers.

“We have 108 revetted bunkers on the Paintbrush course. They have been rebuilt three times in the course’s life, but the revet doesn’t last very long, and we have a lot of dirt faces. One of the really appealing things about EcoBunker is that the lines are never going to disappear, and so we will always keep that traditional look.”

EcoBunker inventor and CEO Richard Allen explains the engineering challenges in such a high wall, and how the product solves them. “In my original invention of synthetic sod walls, all the stability was provided by the tiles,” he says. “This monster bunker at the Pulpit could not have been built using the original method: the active soil pressure and potential hydrostatic loads would have been too high. It is however a perfect opportunity to demonstrate the superior load bearing capacity of my later invention which modifies the backfill with cement, effectively creating a much more robust earth retaining structure. This 12 foot high wall is the best example yet of this Patent Pending technology.”

EcoBunker Canada boss Jay Morgan did the initial training on site at the Pulpit and was on site during the six day build by contractor KCM Construction. “It was an interesting build, being so high,” he smiles. “There were six or seven people working ten hour days, and, as the wall grew higher, we had to use a six foot stepladder to put the pieces of EcoBunker in place! But it’s done now, and it looks great.”