Olazábal will keep alive the spirit of Seve’s original creation, while instilling the playing characteristics that have defined his career 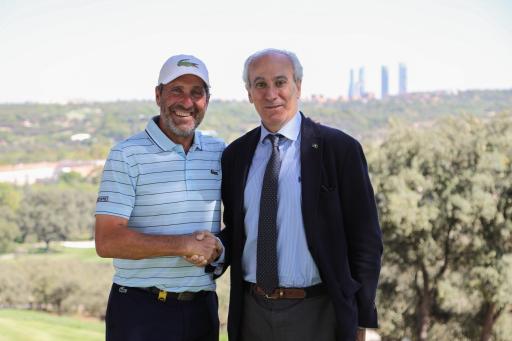 Spanish legend and two-time Major winner, Jose María Olazábal, was today chosen to lead a project to renew the back nine of the Yellow Course at the Club de Campo Villa de Madrid, originally laid out by his great friend and golf legend, Severiano Ballesteros.

Club de Campo will host this week’s Mutuactivos Open de España on the European Tour (3-6 October) and is considered one of Spain’s finest golfing venues. The original Yellow Course first opened for play in 1993 and its second nine holes make it one of less than 35 golf courses worldwide where Seve’s unique design principles can be enjoyed.

“It is a great joy for the club that a figure of the status of Jose María Olazábal will build upon Seve Ballesteros’ legacy with the renewal of the Yellow Course at Club de Campo Villa de Madrid,” said Juan Carlos Vera Pro, Director of Club de Campo Villa de Madrid. “Preserving Seve’s essence will be an important part of this project, and there is no better designer in the game to meet this objective.”

Over the course of a storied career, Olazábal earned one of the strongest resumes in the game, recording 33 international victories as a professional, including Masters Tournament successes in 1994 and 1999. Olazábal also joined forces with Seve Ballesteros in four of his six Ryder Cup appearances, forging one of the most successful and memorable partnerships in the history of the event.

Olazábal famously paid tribute to his great friend upon leading his European team to victory against all odds in the 2012 Ryder Cup, daubed the ‘Miracle of Medinah’. The 53-year-old has been a member of golf’s Hall of Fame since 2009 and won the Príncipe de Asturias de los Deportes Award in 2013, in recognition of his services to sport.

In recent years, the Fuenterrabía native has expanded his golf course design portfolio both at home and abroad, most recently breaking ground on the construction of two new golf courses at Costa Navarino in Greece, recognised as one of Europe’s leading golf resorts.

Olazábal’s design philosophy is inspired by the values that marked his own playing career, including the passion, integrity and respect for which he is unwaveringly known.

Of the Club de Campo Villa de Madrid Project, Jose María Olazábal said: “I am extremely proud and feel very privileged to be chosen to follow Seve with the renewal of the Yellow Course at Club de Campo. This club is very special for me; I still remember winning the Spanish Boys Championship here when I was 14 years old.

“It is one of the best golf courses in Spain without a doubt. We want to update these nine holes to ensure they are more playable but still demanding by modern standards by widening fairways, greens and tees, while taking into account sustainability and the environment.

“I’m excited to get started, as we look to embrace the spirit of Seve’s original design and attract more golfers to experience this fantastic golf course.”

Among the adaptations to the Yellow Course will be the extension of a number of holes, while adapting the routing to the needs of an increasing number of golfers visiting Club de Campo will also be considered.

Once complete, the club will offer two world-class, 18-hole courses located just ten minutes from the centre of Madrid. The Black Course, the layout for this week’s Open de España, was designed by Javier Arana, who is also responsible for the first nine holes of the Yellow Course.

Club de Campo Villa de Madrid is one of Spain’s most prestigious golf venues and has hosted the Open España on no fewer than nine occasions, as well as several Madrid Masters, the Ladies Open de España (in 2013 and 2019) and the Canada Cup or World Cup of Golf in 1965.

The Club de Campo Villa de Madrid is also an important centre for several other sports, such as horse riding, hockey, tennis, padel, skating and swimming, making it one of the country’s most comprehensive leisure venues.

Previous
14 of the trendiest golf caps on the market this season
Next
Mike Dean celebrates hole-in-one as caddie for ladies Tour pro!