What can we learn from Jordan Spieth's new pre-shot routine on the PGA Tour?

PGA pro Duncan Woolger reveals what Jordan Spieth is working on with his pre-shot routine and what us amateur hacks can learn from it. 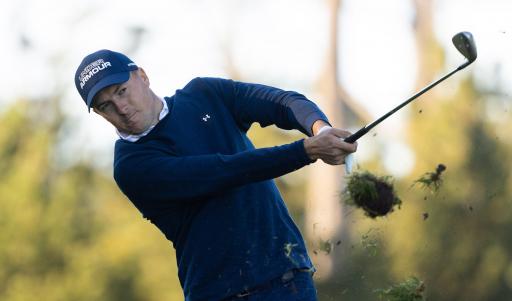 PGA Tour players adopt a number of interesting pre-shot routines to get the most out of their games in 2022. But it's fair to say the majority of us amateur hacks do not even bother with anything.

Some of us serious players will probably have some go-to drill before every shot, but honestly from what I see with my pals and everyone else out on the course, very few players undertake a consistent process before pulling the trigger.

Most of us will take one or two practice swings and hope for the best, but if we are having a really bad round out there then we will more than likely just step up with one look and thrash it.

Pre-shot routines can reap huge reward when it comes to lowering your scores as they repeatedly get you in the zone before each shot.

If you have got a specific swing thought or something you are guarding against doing, then adopting a pre-shot routine can prove a wise move.

After all, it doesn't cost you a shot to do it.

.@JordanSpieth takes this absolutely TERRIFYING swing off the edge of a cliff at Pebble Beach

As long as you aren't taking four or five practice swings and more than 30 seconds over the ball, we completely recommend taking your time on each shot out there and building some sort of rehearsal into your game.

Jordan Spieth's pre-shot routine is a great one to emulate, especially if you find yourself hitting too many hooks and pushes on the course.

Spieth uses this drill on every tee shot and approach shot he hits out on the course, even when he's walking off the edge of a cliff.

Let's take a look at what Spieth is working on with his pre-shot routine:

Now let's hear from Advanced PGA Member Duncan Woolger, a close friend of GolfMagic, who speaks in more detail about what Spieth is trying to achieve and what us amateurs can learn from it:

"Jordan, historically, can get his path, the direction of the clubhead at impact, too far to the right," Woolger tells GolfMagic.

"This leads to too much reliance on timing through impact.

"His ball flight misses would be pushes to the right and hooks to the left."

So what can we learn from Spieth's pre-shot routine?

"First, please remember Jordan’s one of the best players in the world and his recovery skills are absolutely incredible.

"In my opinion, Jordan is rehearsing trying to get the club ‘unstuck’ by rehearsing an ‘over the top’ move to neutralise his path.

"If you’re an amateur golfer, who hooks the ball, the ball moves excessively from right to left for the right handed golfer or pushes the ball to the right, then this practice move may help you.

"However, similar to Jordan, you don’t want to over do the move or you could end up with weak impacts that would fly left to right."

If you give this one a go in practice or out on the course this week we would love to know how you get on. Have you got a pre-shot routine or do you just wing it out on the golf course? Share your thoughts and comments over on GolfMagic's social media channels.