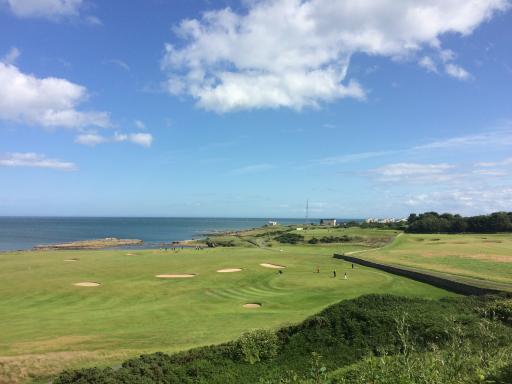 Spectacular, fun , raw, real – golf at Crail is a treat for those in the know and a gem waiting to be discovered.

Crail Golfing Society, as the club is formally known, is two miles north east of the pretty Crail fishing village at Fife Ness, the most easterly part of Fife. It lies just 10 miles down the coast from St Andrews and four from Kingsbarns.

Formed by 11 Crail gentlemen in 1786, the society is the seventh oldest golf club in the world. Original members wore scarlet jackets with plain yellow buttons. Anyone unsuitably attired, or who did not dine in the inn after golf, were fined half a mutchkin of punch.

The venerable Balcomie course, laid out in 1895 by Old Tom Morris, is the quintessential quirky Scottish links. Short in length, long in character. Many of the shore-hugging holes put the "corrr" into course, and it has become a bucket-list layout.

But Craighead, Crail’s more recent addition, should not be viewed as a poor relation. Any qualms about not playing its more illustrious sibling will be quashed when you become absorbed in this intriguing and arresting links.

Designed by the renowned US architect Gil Hanse, the creator of Doral’s Blue Monster in Florida and the man behind the 2016 Olympic course in Rio, Craighead offers a modern slant on the traditional links.

Opened in 1998, it measures up to 6,722 yards off the longest of the four tee options. Running across the clifftops on former arable land, the views stretch from the Forth Estuary and the Isle of May out into the North Sea and around towards St Andrews Bay, with sea vistas on all 18 holes.

No two consecutive holes run in the same direction, meaning the wind – stronger up here than on the shore-hugging Balcomie – constantly changes the equation.

The greens are heavily undulating, and often elevated, but not lightning fast – the staff keep them between seven and nine on the Stimpmeter as any quicker and balls would move with the frequent strong winds in the area.

Like all good links courses, plotting your way between deep, riveted bunkers, humps, hollows and walls - Dane’s Dyke, a 1200 year-old defensive wall built by Vikings to keep out Pictish tribes comes into play on four holes - is an integral part of the challenge.

So too, the treacherously thick rough and clumps of gorse. It is a haven for birds – skylarks, linnets and meadow pipits - but wayward golfers will be less tolerant. Make sure you bring plenty of balls.

But given its recent beginnings Craighead doesn’t feel like a new, incongruous design plonked on ancient land. It feels lived in, weathered and timeless, but polished and fresh, too.

Many of the holes have a sense of fun, and schoolboyish charm, akin to the earliest golfers plotting out the links. You can almost hear them as they devise fiendish challenges: “I know, why don’t we play from up here, down over that wall, around the corner and up to a flag on the cliff edge.”

Perhaps the most obvious example of the more modern design can be found on the second green -  a raised dais at an angle to the fairway next to the access road.  It’s not old-school, but it’s not jarring.

The first five holes meander inland, up to Balcomie Castle, before you head back towards the sea and a more familiar links environment.

To the right of the long sixth, bisected by the remnants of a wall, are views straight down the runway of the disused HMS Jackdaw, a World War II airfield, next door. Another hint at a bygone age which helps gives Craighead a foot into the past.

The 10th is named “Fife Ness” but “Wow” would be a good alternative. The course architect in everyone will get a rush on the tee as they survey the dramatic par four plunging towards the sea. The bunker-ridden approach, wall at the back and the Balcomie’s signature stretch beyond is confirmation that Craighead shares in the heritage of the place.

The hole also begins the linksy heart of Craighead, with the 11th straight uphill to a blind second shot over the dyke, while the 12th drops back to the sea with a deceptive drive on a dog-leg where local knowledge helps to pick the best line for the pin.

The short 13th is a hoot. Teetering on the edge of the cliff, “Cat Ha Brae” is only 140 yards off the yellows but a card-wrecker if you can’t bury your ego. With breeze off the right, shots with any kind of left spin will put to sea for ever. Think like a linksman - keep the ball close to the deck

The 14th – “Lang Man’s Grave” – meanders dramatically along the cliff edge before the short 17th offers a sting in the tail with an elevated green protected by cavernous traps.

Craighead offers a fun, testing and spectacular round of golf and stands as a significant links in its own right. Balcomie might get the headlines, but Craighead is well worth the trip.

Better still, buy a day ticket and play them both.

Afterwards, you will want to savour the stunning views from the clubhouse - a modern reinvention on an old site. The new-build is spacious, although the large and stark main bar and restaurant lacks the charm of the courses.

But the setting is spell-binding on a sunny day and well worth lingering for. Especially with a mutchkin of punch.