Adam Scott equalled the course record at Victoria Golf Club in the second round of the ISPS HANDA Australian Open, while Cameron Smith toils at the other end of the leaderboard. 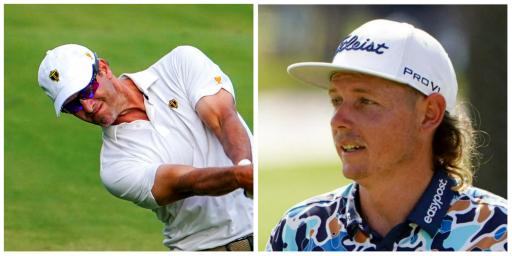 Adam Scott eagled the last hole at Victoria Golf Club in the second round of the ISPS HANDA Australian Open to share the lead alongside fellow Aussie David Micheluzzi.

The 2013 Masters champion made five birdies and an eagle on the 18th hole to reach 8-under. His 63 has taken him to the top of the leaderboard in pursuit of his second win at this event on home turf.

"I kind of tempered my expectations on everything, my own ability today and what I can do to the golf course. I really felt like I had to come out here, really not take any chances, not push anything," Scott said.

"If it was tricky at all, to play safe. I executed most of the day, so even when I laid back, I managed to put it in a good spot still and take the trouble out and not make any errors."

Scott and Micheluzzi lead by three shots from Josh Geary, Haydn Barron and American Gunner Wiebe. Micheluzzi was very excited at the prospect of playing with the former World No.1 in the third round.

Adam Scott was dialled in on par 3s on Friday #AusGolfOpen pic.twitter.com/qKGKQ2G26I

"It's pretty cool. It's one of the things I've dreamed of, Australian Open with Scotty, yeah, yeah, it will be insane. The number of people that will be there and all that will be pretty cool. I'm just looking forward to it," the 26-year-old said.

"I'll just keep plugging away at it and if it happens it happens. If not, then so be it, go on to the next one."

Scott was frustrated with his first round of 71 at Kingston Heath but has recovered strongly to contend for his 12th title on the DP World Tour. In 2019, the 42-year-old won the Australian PGA Championship for the second time, the same event that Cameron Smith won last week.

As for Smith, it was another disappointing day in his home country, but this time at Kingston Heath. Despite making four birdies in round two, he made five bogeys and carded his second consecutive score of 1-over.

The cut was 2-over after 36 holes and this is the score Smith was on at the close of play. He will tee off at Victoria on the 10th hole in the third round with fellow Australians Charlie Dann and Terry Pilkadaris.

Smith, who won his first major title at The Open in July, won his third Australian PGA Championship last week in Brisbane. He added this to his wins at the Sentry Tournament of Champions and The Players Championship in 2022.

Earlier this week, Smith leapt to the defence of LIV Golf boss Greg Norman who has now been urged out of his CEO position by Tiger Woods and Rory McIlroy.