Tiger Woods has called on LIV Golf boss Greg Norman to go so the PGA Tour and the Saudi-financed league can "talk freely". 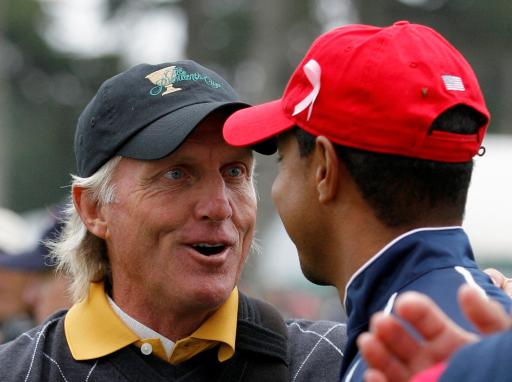 Tiger Woods has called on LIV Golf commissioner Greg Norman to resign, echoing the sentiments expressed by Rory McIlroy as the big cat revealed: "I don't have much left in this leg."

Speaking before the Hero World Challenge in Albany, Bahamas - which he has withdrawn from through injury - Woods said there was an opportunity for the PGA Tour and the Saudi-financed league to move forward if there is "a stay" in litigation.

As many as 11 players filed an antitrust lawsuit in August before the PGA Tour's FedEx Cup playoffs. Eight players have dropped out, although LIV Golf have added themselves as a plaintiff. The PGA Tour have countersued.

Woods also tore into the leadership of LIV Golf on Wednesday, accusing them of at times behaving "tastelessly". He also explained why he believes the Official World Golf Ranking system is "flawed".

He admitted that "nobody expected" the golf world to be this complicated 12 months ago. The 15-time major champion also expressed surprise at the animosity from both sides.

Woods said of the current situation regarding the PGA Tour and LIV:

"I see that there's an opportunity out there if both organizations put a stay on their litigation, but that's the problem, they've got to put a stay on it. And whether or not they do that or not, there's no willingness to negotiate if you have a litigation against you. So if they both have a stay and then have a break and then they can meet and figure something out, then maybe there is something to be had. But I think Greg has to go, first of all, and then obviously litigation against us and then our countersuit against them, those would then have to be at a stay as well. So then we can talk, we can all talk freely."

| Tiger Woods has called for Greg Norman to step down from LIV Golf, saying there is an opportunity for a path forward for both sides if all litigation is dropped... pic.twitter.com/zrJmGqJal8

The aforementioned McIlroy previously called on the two-time Open champion Norman to step down, suggesting he should "exit stage left".

There have been rumblings LIV Golf bosses were thinking moving Norman upstairs to be replaced with a less divisive figure to help increase their legitimacy. This has been denied by LIV.

Woods also confirmed that he never tested positive for COVID-19 despite McIlroy previously expressing alarm he thought he gave the 82-time PGA Tour winner the disease before the landmark major.

When asked about the OWGR, Woods said:

"It's a flawed system. That's something we all here recognize. The field at Dubai got less points than Sea Island and more of the top players were there in Dubai, so obviously there's a flawed system. How do you fix it? You know, those are meetings we're going to have to have. We're going to have to have it with World Golf committee and as well as our -- the main tours that are involved in it, Somehow come up with a better system than is in place now. I remember in my career, when I -- I had a big lead in my career, I didn't have to play a single tournament the next year and I still would be ranked No. 1. We changed that system then. So it has been changed in the past and I'm sure this will be changed hopefully soon."

"Greg (Norman) has gotta leave." -- Tiger Woods on whether or not LIV and the PGA TOUR can coexist. pic.twitter.com/qFNwyfYEVD

The big cat confirmed that going into 2023 his goal will be to play golf's four major championships and one or two more.

"The goal is to play just the major championships and maybe one or two more. That's it. I mean, that's -- physically that's all I can do. I told you that, guys, you know, the beginning of this year, too. I mean, that's -- I don't have much left in this leg, so gear up for the biggest ones and hopefully, you know, lightning catches in a bottle and I'm up there in contention with a chance to win and hopefully I remember how to do that. But again, giving myself a chance to get out there again. I didn't -- as I said, I didn't expect to play three majors this year. We were hoping for just the British Open, but I was able to get two more in there, so that was a big positive."

Woods said he doesn't know what the "end game" will be regarding LIV Golf. He said nothing could happen while there is ongoing litigation.

"We don't know. No one knows [what will happen]. Right now it's -- there's a lot of animosity, especially from their leadership. And they want to be a validated tour with World Ranking Points and they're buying up tours around the world and I don't know -- I don't know what their end game is. It might be just being an official member of the golf ecosystem and being recognized with World Ranking Points. I think that's what their intended goal is.
"You know,they've spent probably close to $2 billion this year. Who's to say they can't spend 4 or $5 billion next year? You know, we just don't know. It's an endless pit of money. But that doesn't necessarily create legacies either. You want to compare yourself to Hogan, you want to compare yourself to Snead, you want to compare yourself to Nicklaus, you can't do that over there, but you can on this Tour."

He confirmed since playing in the 150th Open Championship he has undergone more procedures, but refused to elaborate what surgeries he had.

Woods said he's not sure if he will able to make it back to St. Andrews in eight years' time. He said he wouldn't want to return to just say farewell. "I want to win the damn thing," he said. "Hopefully this leg is still attached."

Woods also confirmed he would never use a golf cart in a PGA Tour event, only using transportation in tournaments where it is permitted.