Par saves do not come better than both of these by Meronk and Wallace in Holland today, especially the one by Meronk out of the water! 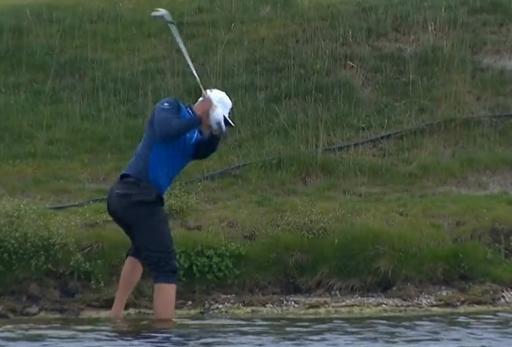 Adrian Meronk and Matt Wallace made the most miraculous par saves of the DP World Tour season thus far during the final round of the Dutch Open, especially Meronk's which came from out of the water!

First up was Wallace, who was all over the shop on the par-4 2nd.

The Englishman found the deep rough with his tee shot on the mound of a bunker and then tugged his second shot way left behind a bush.

Unable to go directly at the flag, Wallace had to chip left of the green.

From there, Wallace read the line and speed to perfection and chipped it in the cup for an unbelievable par save.

An hour later and with rain teaming down at Bernardus Golf Club, Meronk produced a miracle from out of the water on the par-3 8th.

Having misjudged his tee shot with a pitching wedge, Meronk's ball came to rest in the water but half of it was visible.

Instead of taking a drop, Poland's Meronk took his shoes and socks off and splashed it out to some 40 feet to the appluase and cheers of the crowd.

The gallery then went wild when Meronk drained the putt for par.

The best up and down you'll EVER see! @AdrianMeronk makes a remarkable par save at the 8th to stay at -10. #DutchOpen2022 pic.twitter.com/UrvFAklMl9

Next Page: Golf Channel provides on-air correction about Patrick Reed in the third round of the Charles Schwab Challenge on the PGA Tour